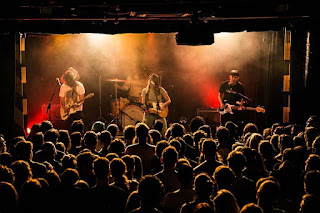 "Do you guys all work at the White House?"

Can't really blame them for asking. Not only were they in DC, location of said House, but evidently a certain band had been binging on episodes of The West Wing on tour.

I was beyond excited to see Middle Kids, and on my birthday no less. What a gift from the gig-going gods! And yet, my party was almost spoiled by the incessant talking of way too many people. The Aussies had sold out the Rock & Roll Hotel, and some in the packed house had more interest in telling each other stupid stories than listening to the great sounds coming from the stage. If only someone would invent a mute button for such instances. Friendly reminder: If you want to sit around drinking and droning on about the minute details of your day and basically being a pain in the ass, don't go to a rock and roll show and fucking spoil it for the people around you. End rant.

Not that my night was spoiled, mind you, but the blabbermouths definitely affected my overall experience. For their part, Middle Kids was simply delightful. From the impassioned jauntiness of "On My Knees" to the buoyant sparkle of "Mistake" to the angular, outsider pop of "Edge of Town," the band was pitch perfect.

If only the bigmouths had stayed at home, it would have been just about perfect.

The folks who were there to see the band were well into the show, singing along and gleefully applauding each song. This is a feel-good band, the kind of band you can listen to at a really low point and feel instantly lifted. As they played, the room seemed to heave at the seams, and steam hung overhead. It felt like the right atmosphere to see Middle Kids, a full house on a Friday night watching them be amazing. I just hope that next time they're in town, the crowd will show them, and each other, the respect they deserve.