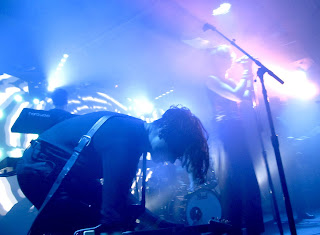 I've written and rewritten this review a number of times already. I'd thought that coming back to it after a while would help, though I'm afraid that's not the case. The thing is, I'm still swooning, and still incredibly tongue-tied. But I'll give it the old college try, because I certainly can't let my show of the year (thus far) go by without attempting to give it the rave review it deserves.

You see, after the number of exceptional shows I've already had the pleasure of seeing this year, I went to the Rock & Roll Hotel expecting some equally exceptional things from The Horrors. I sometimes say that I'm easily impressed, and perhaps in some ways that's true. But when it comes to live music, it takes a lot to shiver my timbers. My first time seeing The Horrors was, well, exceptional. As in, the kind of exceptional that leaves you stunned and feeling breathless for days, and that takes over two weeks to recover from. 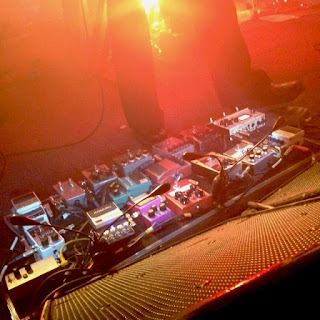 Uniformly dressed in black, the five Horrors ambled on stage, into a haze of steam and fog, and as they did the energy in the room changed into something electric and wonderful. I'd lucked into a spot right in front of Josh, the band's guitar virtuoso/mad scientist, and from this vantage point I was able to see the band's live mastery up close and unimpeded. And what a masterful performance it was.

They began with the sinuous "Hologram" from latest record V, and as they played a couple things became immediately apparent; Faris Badwan is one of the most engaging frontmen around, and Josh Hayward has to be one of the best, most innovative guitarists I've ever seen. The former, all lanky angularity and effortless charisma, sported sunglasses and a commanding, powerful presence. The club's vocal mix wasn't what it should have been, but with Faris it didn't really matter. As for the latter, I was well and truly mesmerized by Hayward's pedals, by his movement, and by his almost constant smile. I'd recently watched an interview with Josh where he discussed making his own pedals in order to create the exact sounds he wanted, and those pedals live made all sorts of magnificent noise. Both he and Badwan were obviously in their element, and the duo provided for an interesting study in live personalities; Badwan authoritative and almost imposing with his mic as well as the mic stand, the stand becoming an extension of himself at certain points, while Hayward moved fluidly yet impatiently, lovingly caressing his guitar as he coaxed it into making banshee wails and seemingly endless otherworldly sounds. 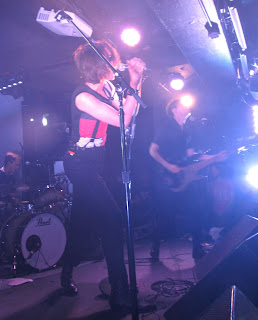 Every song was greeted with an appreciative roar from the assembled inside the club, and the preponderance of steam and fog added to the heady experience of absorbing the delicious onslaught of song after song. Skillfully hopscotching across their catalog, the band included songs from Primary Colours, Skying, Luminous, and V in the evening's set. Somehow, though many of the band's songs are of epic length, the set felt as though it sped along in the blink of an eye. As good as each song is recorded, after hearing what the band does to them live I'm convinced that not only is their music even better when played live but that The Horrors is one of the best live bands you could possibly hope to see. 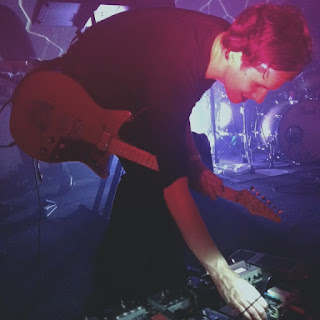 After the glorious slow-burn into celestial climax of "Still Life," the band briefly headed offstage, though having a set list right in front of me I knew there was more to come. The band's two-song encore consisted of a gorgeous, towering version of "Ghost" that throbbed with a raw power that left everyone hanging on tenterhooks with each and every note. Appropriately, "Something to Remember Me By" was the final song of the evening, and was a hell of a memorable way to end the show. When the raucous noise stopped and the band left the stage, there was a moment where it felt as though some kind of vacuum had opened, a curious sensation that demonstrated the magnitude of their presence and the void left behind.

It's possible, of course, that I'll go to a show in the second half of the year that will somehow eclipse the moonlight magic of The Horrors. Possible, but not very likely.

Ghost
Something to Remember Me By