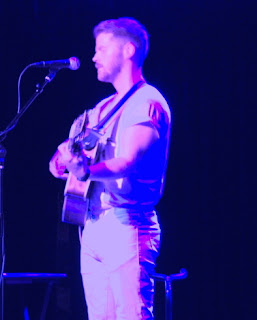 While waiting for Ciaran Lavery to take the stage on the first night of summer, I happened to overhear part of a couple's conversation. The lady loudly proclaimed that there was no such thing as brutal honesty, saying "you don't want to be honest, you just want to be brutal." Her companion didn't seem too convinced. Surprisingly, that wasn't the only mention of brutal honesty the night would bring.

Lavery's entrance happened not long after that, and was incredibly unassuming. Clad in all white he took to the stage quietly, sitting at the upright piano tucked in a dark corner of the stage for the set's first song. He caught me off guard with that, but for the rest of his set I was diligently enraptured.

The beautiful, emotion-heavy rasp of Lavery's voice is no mere studio magic. Poignant and world-weary, Ciaran's voice was powerful yet able to also convey a sense of welcoming intimacy. His lyrics capture moments in time, and the effects of these moments could be seen as he strummed his guitar, eyes closed tightly. Though his latest record Sweet Decay features plenty of well-crafted instrumentation, live Lavery shines when he's just got his guitar (and a piano every now and again).

He made every attempt to engage the Jammin Java crowd, telling us stories about the songs as well as spinning some yarns about his travels. One tale involved Lavery's nocturnal habit of setting alarms on his watch, which he isn't able to do when he's awake. Another involved blankets on Aer Lingus flights. Still another involved divulging how his teenage self played rhythm guitar and not lead guitar when he danced around his bedroom watching music videos and imagined being in a punk band. The stories helped keep a sort of lightness around, as Ciaran's songs can get quite intense. It was when he was talking about the difficulties of making a record that he brought up brutal honesty - and how he admired people who were brutally honest. A chuckle came from the direction of the couple I'd heard earlier at that moment.

The show had a feel of expectancy, the heightened sensation of that moment before you exhale when something major happens. Every song added to the subtle exhilaration, each with its own brooding blend of nostalgia, intensity, and fire. "I'm strangely very nervous," Lavery said at one point, though he needn't have been. The man is truly something special.

He excels at sad songs, in particular, his voice filling the sorrow beautifully and reverentially. And so many of his songs are sad songs, in some way. Even the sad songs of others are no match for Lavery. The second to last song was a cover of The National's "Bloodbuzz Ohio," and Ciaran's voice and his plaintive tinkling of the ivories gave a new sense of dejection to the song. "I really hope you had a good time," Lavery said, before the end of the set that was over far too soon. To be brutally honest, calling it a good time is putting it mildly.