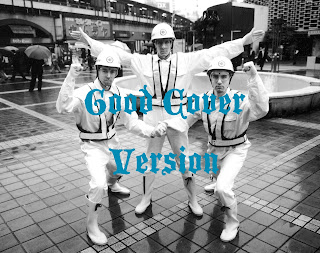 Somehow, the 20th anniversary of Hello Nasty's release is upon us (as of July 14). This Beastie Boys record was everywhere in 1998, and I do mean everywhere. Especially "Intergalactic." There was no escaping this record, love it or hate it (I was in the former camp, luckily).

To celebrate 20 years of Nasty-ness, Jacuzzi Boys and D. A. Stern got together to record a couple Beasties singles - the former going for "Song For The Man" and the latter taking a stab at "I Don't Know."

Focusing on one band of Boys covering another,  Jacuzzi Boys' take on "Song For The Man" takes the just slightly exaggerated lounge beats of the original pro-ladies number and turns it into a jangling, long hair-tossable psych pop nugget. It's a little bit playful, this cover, and the jauntiness of the tinkling ivories recalls velvet-clad, jubilant Kinksian grandiosity. Quite enjoyable, I must say.