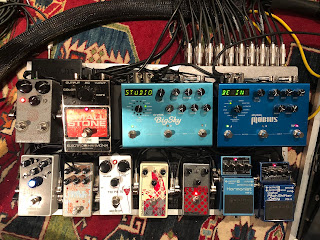 I've been a fan of my next guest's guitar playing for longer than I care to admit. But Peter Holmström is a man with miles of serious talent, and it's hard not to be a fan. He's also a man who obviously loves what he does, and you can both hear the love on record and see it when he takes the stage with either his longtime band The Dandy Warhols or his impressive passion project Pete International Airport. Given the spectrum of sounds he's made over the years, I had a number of inklings that Pete's pedals might be formidable. Which, of course, they are. Just check out the photos. Read on for insight into what spins Pete's pedal-loving wheels. 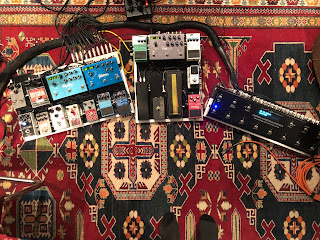 Generally it’s the newest one. But the Goatkeeper by Lightfoot Labs gets used a lot. With it I can create rhythmic/melodic elements for songs. It’s an easy way for me to get started on new projects.

In standard tuning A minor. I have no idea what I’m playing in open tunings, I prefer them.

Who's your guitarist icon?

Pete Hayes. His use of alternate tunings is inspiring and the level of detail that goes into everything is something I aspire to.

With all the pedals out there, how do you decide which ones to procure?

Looks and I’m only kinda joking. Of course it has to sound good too but with do many pedals it has to stand out someway.

What was your first pedal? And what's the pedal you've had for the longest time?

The first was a Cry Baby Wha. The second was Rat pedal which I still have, 26 years later.

Luckily I’m friends with Malekko and if I dream anything up that they like it...the Charlie Foxtrot was the first and they are working on the second! 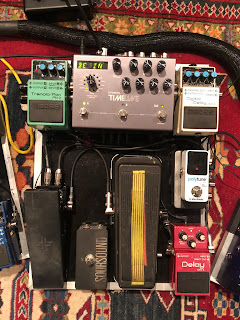