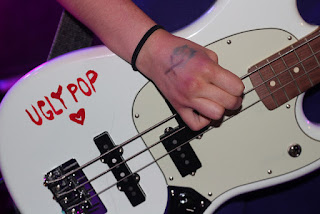 Intrepid mysterious Special Guest Star The Paper went in search of good live sounds, and the following is what transpired when he took in Skating Polly at DC9.

A year is a long time. It feels even longer to wait that long to see Skating Polly again. On tour to support their newest long player, The Make It All Show, the trio reminded me why I was so smitten when I saw them live last summer. I was mistaken to construe them as an amalgam of various ice cream flavors. Skating Polly is in a genre of their own, a genre they coined "Ugly Pop," as depicted in flowery red lettering on Kelli's Fender Mustang.

Ugly Pop boils down to the intersection of cute and competence. It's high-kicking the air while plucking the bass. It's switching instruments with all your bandmates. It's rocking so hard hair gets into your mouth and you have to ask your guitarist if it looks like you're pinching your tongue or trying to remove hair. Best of all, it's introducing a love song by saying, "I know you're all punks but love is good." 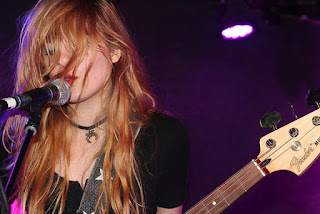 The playful connotation is only part of the story. On "Louder In Outer Space," Peyton opened with an auspicious guitar riff followed by barely there vocals that got me to tiptoe levels of anticipation. Then Kurtis and Kelli sent shivers down my spine when they both joined in in perfect tandem on the bass drum and bass. We were treated to another meticulous and polished performance in "Little Girl Blue and The Battle Envy," the steady drone of the bass and snare maintained a brooding atmosphere that was surprisingly (or perhaps not so surprisingly) addictive. 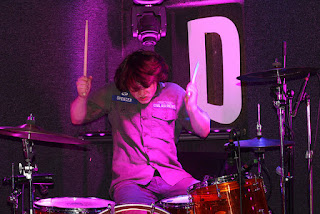 The final ingredient of Ugly Pop involves contrasting vocal ranges. Higher pitched and more agitated, Kelli was a welcoming siren who turned heads when she morphed into sugar and silk. Peyton's delivery commanded attention effortlessly, her voice magnetic in its maturity and radiance. The harmony of the two was dangerously lip biting good. 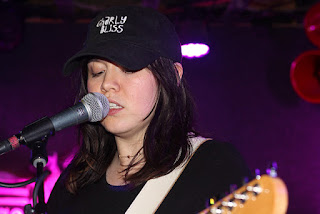