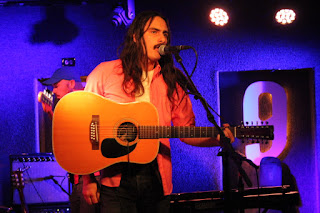 He was kneeling on the DC9 stage, tuning his guitar, when Patsy Cline's "Walking After Midnight" came over the club's stereo. As he tuned, Michael Rault softly sang along to the magnificent Miss Cline, showing a reverence for the classics that's evident in his songs.

Joined by a full four-piece band, Rault treated the small but appreciate Tuesday night crowd to a great set. His rich, velveteen vocals were enhanced by the golden, 70s-infused sounds of the foursome surrounding him.

Michael's appeal was effortless, his ease and comfort onstage apparent. The vibrant intricacies of the songs were captivating, commanding but not aggressive. The Canadian troubadour with psych inclinations and pop panache could be considered a man slightly out of place - though I'd say he was absolutely made for these times. 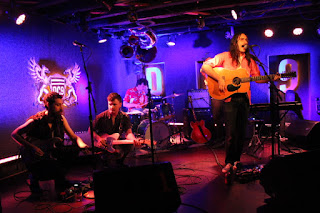 From the rough and ready grit of older songs like "Too All My Friends" to the vintage vibes of "New Day Tonight" and "Sleep With Me," Rault and co. were in fine fettle. Evocative of times long gone and speaking to the impatient impermanence of today, I was quite impressed by just how solid the band sounded. After a couple weeks off, Michael is getting back out on the road and heading west, and if you're able to I strongly suggest going to see what the hullabaloo is about.