An Interview With Michael Cathro (Ha The Unclear) 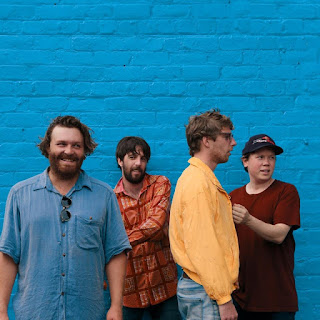 When we left Ha The Unclear, the New Zealand outfit was singing wry, witty, addictive nuggets about mould and furniture. Fast forward a couple years, and the band is readying for the release of their new record, Invisible Lines, out later this summer. In advance of that, they've unleashed the single "Wallace Line," inspired by Alfred Russel Wallace's 19th century observations on evolutionary adaptation. Yes, really. "Wallace Line" is a fine little sullen pop nugget indeed, all jangling and pouting and irresistible.

The man behind Ha The Unclear's songwriting, Michael Cathro, kindly took some time to channel his inner Fab Foursome. Read on to get to know Cathro and his cohorts, and be sure you keep an eye on this band.

Supporting The Shins was pretty exciting for me. About 10 years ago James Mercer played in a little record store in my hometown, Dunedin, so I went along because I couldn’t afford a ticket for The Shins' show. He played acoustically, no microphone, and all I remember are these lyrics about boats and an incredible warmth and after that I was a Shins lifer. So it was surreal to get the opportunity to support them last year.

Yes. I am anxious about many things, but thankfully not flying.

I don’t feel like I’m trying to get a message across to anyone. I write about my own neuroses and concerns and amplify my own situations and feelings I think as a coping mechanism. I find self-parody to be incredibly perspective-giving.

Not particularly, we just make what sounds interesting to us. Lyrically, I try not to be cliché but I think that’s just avoiding trend rather than setting it.

I have a 1959 Guild short scale but it was getting so beaten up from touring that I bought a Classic Vibes as a workhorse I intend to mod as funds allow. I have some Lollar pickups en route!

My gf always needs my help with computer stuff.

Engagingly, socially, hilariously. If anyone built a human pyramid while we played, I’d be OK with that.

I need to enter a thoughtful space and usually I’ll get there through reading books that make me feel a certain way. I hold on to couplets or word combinations that I find amusing and generate ideas from those. I don’t think I write any one way, but usually it starts with a lyric or melodic idea.

Will you please take these golden egg-laying geese? They’re easy to look after but we just have too many of them.

The bouncing heads from Spirited Away.

Sometimes I'll get verses around the wrong way or sing the same one twice because we have a lot of lyrics. It’s all about hitting that first word and you’re fine. We have quite a long song narrating a character’s entire life from the perspective of his coffee table and that one gives me a bit of grief.

I’ve never been skiing or snowboarding. I should do that one day. I just fucking hate being cold.

Teenagers are probably wiser than I am so I would hate to preach but...sleep is king, get all of it.

When I was a kid we threw eggs at the windscreen of some skinheads. That was a lucky escape.

In the band realm of making music you’re expected to bring a certain amount of energy or at least, it feels like we are hosting when it is our show so I feel a modicum of responsibility to entertain, show people in, pour them a drink, make a shit joke.