An Interview With All Our Exes Live In Texas 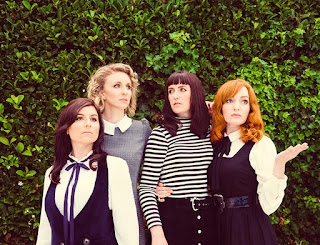 With harmonies to chill spines the world over and some endearing, impeccable folk chops, Australia's All Our Exes Live In Texas is a gang of four irresistible sirens. You can see the salty sweet ladies up close and personal on their current US tour, check their official site for the dates. There's not one but two DC area shows; Saturday, 6/16, at the Columbia Arts Fest (Maryland) and again on Monday, 6/18, at the Kennedy Center's Millennium Stage (which is free, so basically, no excuse to miss it!).

ELANA: Definitely our ARIA win. It was such a massive surprise and there was a lot of love in the room from the Australian music industry. We were in shock for weeks. But then there was that berry danish I dropped face down on the street in Canberra and decided to eat it anyway...that was pretty exciting.

KATIE: I think two of mine would be Ryan Adams and Radiohead. I just feel like every record they put out is incredible. The production on Radiohead's albums is INSANE. I am also obsessed with Phoebe Bridgers. She manages to capture the essence of her songs in such a special way.

GEORGIA: Absolutely. I love planes. I love turbulence. I love take-off and landing. I even love plane food. Any time that I can be sitting in activewear, watching back-to-back movies, and constantly moisturising is precious time.

HANNAH: Nooooo way. It's such a bummer we don't have longer in any of the places we go - it's generally roll in, do the show, roll out to the next town. We generally have time to do one fun tourist/great thing from that place - Seattle we went to the Sleepless in Seattle House Boat, San Fran we went to the Castro - everywhere is so totally different, even if they are just an hour apart.

ELANA: We are a band of women kicking arse together in the music industry. We are trying to bring awareness to issues such as domestic violence (one woman per week in Australia dies at the hands of her ex-partner or spouse). We are aiming to achieve equality in the workplace and home. The same thing women have been fighting for since the 19th century. We are also Green Ambassadors in Australia. We have a zero plastics policy backstage at our shows. We are also supporters of the Stop Adani movement in Australia.

KATIE: Oh boy. That's a big one. I think maybe Mum haha. Loves the crap out of you but doesn't always understand boundaries...

GEORGIA: So many places! I'd love to go to Wales to see where my ancestors lived. I recently went to Italy for a month and completely fell in love with everyone and everything. I'd love to explore that country more. The band has been offered a gig on a Greek island too so that is high on the list!

HANNAH: I think that would be such a big call for anyone to say that! I was just thinking about if anyone who has set trends musically knows they are when they are doing it...maybe Elvis knew. As a band I feel like we are following in the path of a lot of strong women and songwriters who have paved the way for us to be able to do what we do. We are working with LA producer Jake Sinclair at the moment and the music is becoming a blend of folk and pop, we are really excited about it (not sure if it'll be a trend though!).

KATIE: I have a Martin Road Series acoustic which I absolutely love. And I just recently got an Ibanez artcore hollowbody electric which is completely my fave. I love writing on her and she's super inspiring!

ELANA: No, but I offer it anyway. Actually I have high school students and they ask for advice. I tell them to do the opposite of whatever I tell them, which is confusing if you think about it.

GEORGIA: Respectful silence, interrupted every three and a half minutes by thunderous applause. I am joking. We are very lucky and tend to have very beautiful, thoughtful audiences. The main thing we hope for is that people are respectful of one another and for the most part that's what happens. I've been to concerts where I haven't felt safe because of the actions of people around me and it isn't acceptable. It's not a problem we have had to face yet but we would certainly not shy away from speaking up from stage (and social media) if we saw inappropriate behaviour in the crowd.

KATIE: It varies I think. Sometimes a melody will come to me out of nowhere - if I have the time/headspace for that to happen. Otherwise it's just kind of my natural outlet. If I have a feeling or an experience I usually write a few lines down in my phone and lyrics spring up from there. I used to write a lot on the piano but being on the road isn't conducive to that. Now I usually find a quiet spot and sit with my guitar and just play until something grabs me. Either way I need to do it every few days or I lose my mind!

HANNAH: Would you be okay with me giving you a few million dollars, a Paris apartment, and unlimited vintage clothes no strings attached? Would that be okay?

ELANA: Indie/folk. The day we played after an AC/DC covers band in Sydney we were described as "the sponge cake chaser to a bag of drugs." We have a little more smokey whisky in our sound now after 5 years of touring together. It feels like we are just hitting our stride musically. Our voices, despite being very individual, lock in to each other like perfect puzzle pieces. These days it's more like a sponge cake with a smokey whisky chaser and a generous helping of heartache, and fist pumping feminism.

HANNAH: Your best friends are your friends for life - be kind and love the shit out of each other, you are all going through the same thing. Do whatever you want. When you are in high school you are told you should go straight to uni (and get into heaps of debt), you go to uni and finish the course and then you are a social media manager or whatever, then you are married and have a kid. And that can be achieved by the age of 30. So bloody take your time. Do whatever you want. Travel. Date. Try out a whole bunch of jobs. Nothing is forever and everything can change!

ELANA: I went skydiving about 6 years ago with a really budget company in Picton, NSW, Australia. The lady at the front desk was on heavy painkillers and was slurring heavily while asking us to sign our release forms to say if anything went wrong on the dive her company would not be liable. Then they paired us up with our instructors. Mine was called "Sick C$nt" so that was cool. The plane did not look air-worthy. It looked like it had been crudely welded together from old scraps from a discarded metal yard. I was crapping my dacks pants. Once I was in the air I didn’t care. And I didn’t die :) Wooooooo!!!

KATIE: I definitely I see myself as a musician, but I think our audience probably sees us as entertainers - particularly because our shows are usually full of plenty of onstage banter and silliness. I never thought I would be an entertainer but it's a pretty nice idea to think I might be!