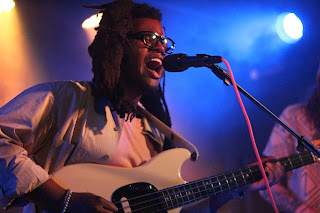 Intrepid mysterious Special Guest Star The Paper went in search of good live sounds, and the following is what transpired when he took in Yuno at U Street Music Hall.

It was an early show for a Friday, but the Music Hall was auspiciously bustling a half hour before Yuno was scheduled to go on. Then, mere moments after the band took the stage, someone shouted his name, dragging the last syllable like a melody. I am afraid the performance did not quite match the enthusiasm of said fan. Then I discovered that he "never thinks about a live show when writing songs," and things made more sense.

Yuno sang while taking turns strumming guitar and looping his vocals through an effects machine. For those unaware, singing while playing guitar is much harder than it looks so anything more is impressive. Unfortunately, in my opinion Emily Wells has that market well cornered. Nevertheless, it was sufficient for the diehard fan to scream his name again in the middle of the set. While somewhat annoying, it highlights the intricacies of the music that belies its unassuming display. It's not music that demands attention. It's earned.

Jordan was swell on the guitar. Like Yuno, he made it look effortless and looked cool while doing so. Brian was not far behind on his percussion pad. The two struck a measured balance that supplemented Yuno's full voice to reach a pleasant accord. Good music speaks for itself. Showmanship is entirely extra.


[words and photo of Yuno by The Paper]