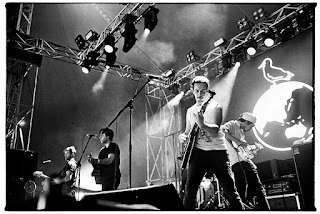 I'd been looking forward to seeing Rolling Blackouts Coastal Fever for weeks, and nothing, not even a hellacious 6-hour drive up I-95 coming home from North Carolina, was going to stop me. I made in just in time to sidle into the rear of DC9 for what ended up being one of my favorite shows of 2018.

It was a packed house, evidently not even the fact that the day before had been Cinco de Mayo AND the Kentucky Derby was going to stop the assembled bunch of RBCF enthusiasts from continuing the weekend's party and witnessing this bounty of goodness in person. Monday morning be damned!

From the jaunty opening notes of "Clean Slate," I was well and truly smitten. And judging by the reactions around me, I certainly wasn't the only smitten kitten in the place. The RBCF jangle has claws, sure, but it caters to good times.

Appealingly, the Aussie quintet bests their recorded excellence in the flesh. While tight and together, there was a slight quiver throughout the set, and a feeling that going off script was an ever-present probability. When the first of my personal favorite trifecta, "Julie's Place," got going, I did internal jumps for joy. The band's boundless energy and constant movement fed into the dizzy giddiness particularly well here, making it hard not to smile like a crazy person.

"Sick Bug," another favorite that had a lot of other fans in the crowd, was feverish and sweaty and irrepressible. The constant interplay of three singers kept things interesting, from a vocal standpoint, and the band also hit the right spot when it came to banter. At one point, the comment was made that, "we drove from Seattle. It's a really big country. And there's a lot of nothing in the middle," to which a heck of a collective chuckle rose up from the throng.

The band's energy, which at times could be a little manic, was totally infectious. I can't imagine seeing this band and not feeling incredibly happy. The treasure that is "Fountain of Good Fortune" got a hearty welcome, and the song was impeccably done. When my third favorite, "Wide Eyes," followed that, I nearly swooned in place.

After a voracious chant of "two more songs," the band came back for more, including a knockout cover of Orange Juice's "Blue Boy." It was the perfect song for them to cover, as their sound is obviously influenced by the Glasgow School, but they managed to make it sound very nearly like a RBCF song. It was a high point amongst a set full of high points.

I often complain about DC crowds not showing up for good shows, but on this night I was proud of the Sunday nighters. By the end of the night, the club was nice and steamy, thanks to the performance from the dudes and the mass of enthralled bodies shaking limbs to song after song. Just over halfway through the set, I noted that RBCF was a new favorite live band, and I can confirm that's still true. I'd love to be able to see them several nights in a row, because I imagine no two RBCF gigs would be the same. I left the club feeling starry-eyed and incredibly smitten. Go see this band.