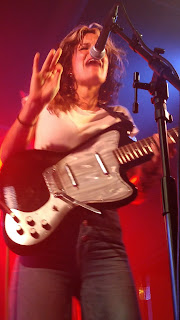 Intrepid mysterious Special Guest Star The Paper went in search of good live sounds, and the following is what transpired when he took in Hinds at the U Street Music Hall.

It was close to showtime when I found out I was seeing Hinds. This was unfortunate for two reasons: I didn't have my earplugs or camera with me (there's no going back to orange foam after experiencing the joys of having high fidelity earplugs). And as expected, my ears were already hurting after opener Made Violent (it's rude to skip openers), who would've been fine otherwise. So I was feeling slightly apprehensive when Hinds took the stage.

I was quickly reminded of what Dr. Emily Nagoski said about arousal non concordance;

In short, my ears had no complaints about the Madrid four piece. In fact, it was the very opposite. They're like Warpaint if the LA outfit played pop music. On the surface, the catchy composition sounds simple and straightforward. Until we reached mid song beats per minute changes, which Amber drove with an accuracy that would make a metronome jealous. It also drove every head in the crowd to nod along. There can be no better demonstration of making art out of math.

Ana and Carlotta were intertwined like the yin and the yang. The two weaved guitar lines that compelled many to physically follow suit with every combination of body parts. Their strength lies in voices worthy of trademarks. Sensual and furious all at once, each voice shines with palpable personality. In the words of Carlotta, it felt like we know each other. This was especially true for the lucky audience member who got to dance on stage. It turned out to be a blessing that I didn't have my camera, because I was too busy doing the same.


[words and photo of Hinds by The Paper]