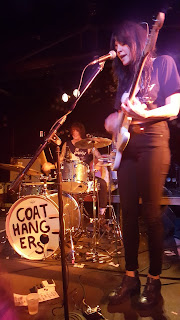 Intrepid Fuzzy Logic Intern Andrew is constantly in search of good live sounds, and the following is what transpired when he took in The Coathangers at the Black Cat. When he's not getting his intern on, Andrew is the DC representative for UK campaign Girls Against, who look to raise awareness and ultimately end sexual harassment at gigs.

Flippantly formed twelve years ago and fueled by the backbone of a budding, party-driven, Atlanta music scene, The Coathangers honed their unfamiliarity and rudimentary foundations of musicianship into their own brand of scorching, unapologetic punk rock. Veterans in their own right, The Coathangers has achieved an unmatched authenticity through years of relentless touring and a “fake it till you make it” attitude.

Last year I had the privilege of interviewing the Coathangers for Girls Against and got to experience their scorching, shambolic punk firsthand. When they stopped by DC9 for their tour promoting then-latest EP, Parasite, I was able to pick their brains and discuss their responses to misogyny and other life experiences that resonate throughout their catalog. Wounded and still processing the changing of the guard under the newly-crowned conservative regime, the intimacy and primal nature of their set gave the crowd that night the sense that we were a part of their gang. Their liveliness and genuineness aided their message of having as much fun as possible under difficult life circumstances.

From the cheeky and brash lyricism of their early works like “Parchezzi” and “Nestle in My Boobies” to their maturation and elevated production of newer works like “Perfume” and “Captain’s Dead,” The Coathangers has triumphantly managed to break through sonic barriers with every new release while maintaining a raw simplicity that mirrors from their live performances.

Now on the road promoting their first ever live album, Atlanta’s fiery trio of Stephanie Luke, Julia Kugel, and Meredith Franco made their way to the Black Cat in support of their Suicide Squeeze label mates Minus the Bear. 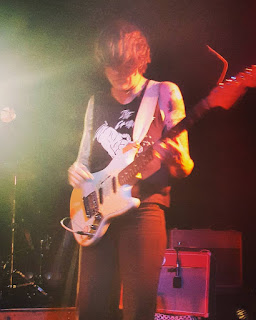 Creeping to the stage slowly by the command of the Black Cat’s sound engineer, The Coathangers walked onstage mischievously swaying to the jubilant cheesiness of ABBA’s “Fernando.” Grinning from the crowd’s sarcastically appreciative welcome, the band stirred the crowd, ready to showcase their blistering brand of playful punk. Equipped with the songs that allowed them to break through to a wider audience and critical acclaim, guitarist Julia Kugel started the set with “Watch Your Back,” the first single off their latest full-length album, Nosebleed Weekend.

Armed with a coral red VOX amplifier and the crunchy cleanliness of her Fender Mustang, Kugel utilized a dramatic and distinctly manic strumming pattern for her lead guitar work that paired well with her no frills, high-pitched vocals. A stellar contrast, drummer Stephanie Luke chimed in with her guttural, raspy voice to recant the lyrics, “back you can never go back!” With the steady beat of her ever-appropriate Pabst Blue Ribbon snare drum, Luke worked in tandem with the unique index finger picking of bassist Meredith Franco to deliver a deep focus to their sound.

Tight as can be, The Coathangers have mastered minimalism as the vessel for their melodic hooks and clever quips. There is, however, a contradictory carelessness and spontaneous beauty that they seem to capture. They are as DIY as can be, and they simply do not give a fuck about the supposed rules of rock music. The track “Shut Up” served as a prime example, in a proverbial game of musical chairs, Kugel swapped roles with Luke to disturb the dynamic and challenge themselves as musicians. The final track of their set was the biggest curveball of all, with the song “Squeeki Tiki.” Kugel ditched her guitar and swapped it for an actual squeaky toy, much to the delight of the crowd.

The Coathangers expertly delivered elements of unbridled showmanship, remorseless mania, and a brutal honesty to their songwriting and live performance. Watching them balance discipline and obvious hard work without taking themselves too seriously is special, and they're an act that's uniquely captured in their upcoming live album (due out June 1st).


[words and photos of The Coathangers by Andrew JW Koh]