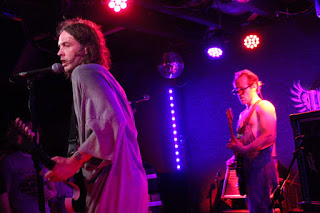 I'd been impatiently waiting to see BRONCHO live for years. YEARS. Heading into last week's show at DC9, you might say I had some rather astronomical expectations of what the Oklahoma outfit might have in store. Sure, the risk of disappointment was high, what with such sky-high expectations. Many a band probably would have underwhelmed. But not BRONCHO. No sir. No ma'am. They took my expectations firmly in hand, and with a sweaty, raunchy set went leaps and bounds beyond, turning in one of my favorite shows of the year to-date.

Along with a solid crowd full of starry-eyed BRONCHO acolytes, I was treated to all manner of raw, full-on rock and fucking roll. As good as they are on record, and if you're already a fellow fan you know just how good that is, BRONCHO is a band that truly lives out their potential on a stage. 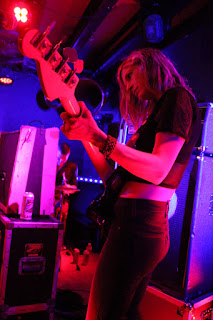 It began almost casually, with the band taking the stage one at a time, frontman Ryan Lindsey ambling to his post decked head to toe in baggy, ash gray sweats and high top Nikes tucked flamboyantly into the legs of his pants. It got serious as soon as everyone was plugged in, though, as soon as the band kicked into "China," the shambolic denouement of the sensational record Just Enough Hip to Be Woman (if you don't already own it, stop what you're doing and buy it now). 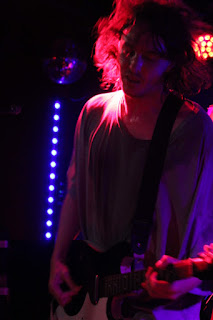 Song after song was imparted with a sneaky skillful delivery - this is a band that's incredibly talented and yet they make it all seem so deceptively easy. Casual, almost. Not that there isn't any strut to their songs. Oh no. They know exactly what they're doing with these fuzzed-out, filthy nuggets. There was a well-deserved swagger. Hell, if you're this good live why not preen a little? At times, it felt like the set was going to go on all night. Every now and then, the band members would turn and give one another the eye, communicating to each other to keep it going. Each of the four seemed to move around constantly, there was no standing still as they kept on and on with their positively devilish demon beats. 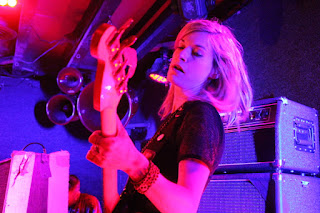 I've got to be honest, I went from objective reviewer to blissed-out fangirl in no time flat. I was already a firm believer in the power of BRONCHO, but the band's live chemistry was off the charts, and my mind was sufficiently melted. Something magic happened in that club. By the time it was all over, steam was visibly floating through the club and Ryan was barefoot and dripping with sweat - is it possible to play a killer set without someone losing their shoes? After this, I'm not sure. 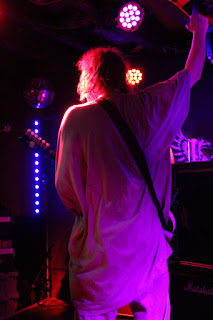