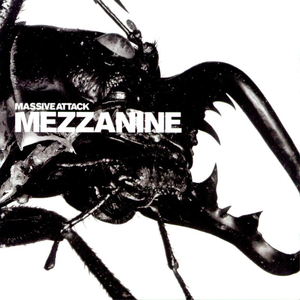 It feels like only yesterday that this album came out. But it wasn't! Let's wish a very happy 20th anniversary to Massive Attack's Mezzanine, and revisit just what makes this such a special record.

I should make it clear that I adore basically everything Massive Attack has released over the years. But something about Mezzanine made it one of my favorite records of the 1990s, and it's still a favorite record to this day. I might actually love Mezzanine even more today than I did 20 years ago. To say these songs have aged well is to make a colossal understatement. This is a truly thrilling record, a seductive sensory overload that is an absolute masterwork of electronic music. For me, this is the record that defines Massive Attack, and the magic they can make.

It begins with "Angel," and with the smoothly silk vocals of Horance Andy chased by the something-wicked-this-way-comes beat. Following that is the malevolent midnight gloom of "Risingson," sinister and fixated. In this three-song progression of nighttime, the dawn eventually peeks through courtesy of the angelic vocals of Cocteau Twins's Elizabeth Fraser and "Teardrop."

If forced, I'd probably pick "Inertia Creeps" as my favorite song from Mezzanine. The song itself creeps ever closer and takes hold, a velvet vise of undeniable undulations and fixed gaze beats. It manages to be both taut with tension and temptingly inviting, It's truly impeccable, though that can be said of the album as a whole. The intricate throb of "Dissolved Girl" leads the way for the second vocal turn from Horace Andy in the direct slow motion stride of "Man Next Door." Elizabeth Fraser once again plays the siren on the sublime "Black Milk," a collision of delicacy and ravishing slink.

The album's title track is another shifty, shadowy onslaught of inky vocals and heavy noise. Fraser appears once more on the album, adding a beguiling lightness of being to the expansive, foggy fugue of "Group Four." Things come to a close with the glitchy chill of "(Exchange)," the optimal song for coming down from the rest of the album.

In truth, there's only one thing I don't love about Mezzanine, and that's the cover. Otherwise, it's basically perfection. If 20 years have gone by since you last listened to Mezzanine, there's no better time to revisit this classic then right now.