An Interview With Smokey Brights 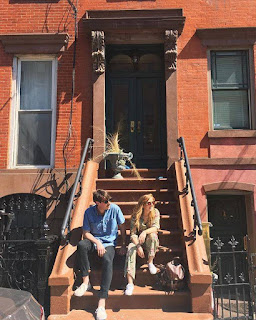 Seattle's Smokey Brights use one of the best self-descriptors I've seen recently: Fleetwood psych. That's a pretty accurate representation of their sound, though in truth there's a lot more to it than just sweet harmonies and psych-tinged vintage rock. Guided by husband-wife pair Ryan Devlin and Kim West, Smokey Brights sure does make some kind of pretty noise.

Read on to see how Smokey Brights take on the grab bag of Beatles questions (spoiler alert: they speak a lot of truth), and be sure to keep a close eye on this likable lot.

Our sold-out record release show at The Tractor this past January. The show sold out well in advance, and the positivity from the crowd was palpable. (If you were there and are reading this, THANK YOU!) People stood shoulder-to-shoulder all night long, singing along with our lyrics, dancing to our grooves, and buying us out of all of the records we had brought with us. It was an absolute trip. The next day, Seattle's "grunge" radio station, The End, called us “the best band in Seattle right now.” While we'd never say that about ourselves, it sure was a crazy thing to hear -especially considering the talent in this town.

I have to feel safe - my dad has been a commercial airline pilot my entire life. If I got worried when I fly, then I’d have to worry 24/7 with my pops flying around god knows where. Flying tubes of metal? Seems safe to me.

Definitely not, and we have the Google Maps history to prove it. #foreverlost

We have a whole helluva lot to say these days, but if I could sum up our main message it would be this: fuck apathy. We are living in a time where the racist Dorito bag parading in a human suit who occupies the White House is trying to get us to stop paying attention. Every day is a new crisis. The whiplash of it all gets exhausting. Turning your back on it all feels like the easiest thing, but that is utter folly. The next one to be kicked out of this country, have a loved one die from gun violence, or have their entire savings depleted by medical bills will eventually be you. So, vote in every election, talk with other humans (even if you don’t like them) and learn what’s going on around you even when it hurts. When it’s time to have fun, you can go ahead and take that seriously too. In fact, dance and party your ass off. Just be present.

Sure, you in? For us, it's not about setting a trend in music. It's about making music that transcends those latest trends. It's about writing songs that people connect with - songs that people need. We recently had a friend tell us that she turns on "Come to Terms" every time she gets pissed off about the news. To me, that is the highest compliment - we created a piece of art that someone needs in their life. How friggin cool is that?

Mostly the sparkly Fender-sounding ones. Kim’s synth work and our vocal harmonies live in a specific band of frequencies, so we aim to put guitars in a place where they don't muddy that up too much. I love my Telecaster (named Kim, after my wife who gifted it to me) and my Jazzmaster (no name yet, guitar of 6 years.)

Yes, every now and then. Anything on your mind?

I used to book a music venue here in Seattle and then worked for an arts magazine. Add being a touring musician to that and I do have a weird perspective on booking, music, and media that some people find helpful. I would never advertise it as helpful however - I feel like an absolute beginner most days of my life. The moment you stop feeling like a hack, though, is the moment you should probably find a new path.

Considering they are the ones who took a night out of their lives and dollars out of their wallets to be with us, we like to leave it up to them to decide what will make the show the most fun for them. We have been wanting to tell people to start saying hello to their neighbors at our shows, though. Every single person I meet at Smokeys gigs is, like, unbelievably nice. We mostly want people to talk to with one another because we truly feel like they'd all be friends. We haven’t figured out how to say that without sounding like a band of high school principals though.

We just wake up everyday and put that metaphorical mental song antenna out. Sometimes it’s sitting at our piano or with a guitar, sometimes it’s walking through our neighborhood looking at trees. Every once in while something floats by and we grab it. The nice thing is there are two of us (Kim and Ryan) out collecting snips of would-be songs. Usually they’re captured as voice memos on our phones. They’re usually just fragments to start, but every once in a while we catch one that lays itself out for us at the very start.

Oh geez, always. Pretty much any time you let your brain "think" too much on stage, you're gonna trip yourself up. Since mental black outs are basically inevitable, what really matters is how you handle them.

There are Guinness Book/World Records I think I could beat given enough time, but Kim's weirdly not into the long, curly fingernail thing, though. Luckily, music is like a Möbius strip of a journey - you get to where you were going and you just find more road to travel. I figure we’ll be on this one for a while.

The kind of existential crap they will almost certainly disregard, like “No one REALLY knows what they’re doing” or “You tell me! What should you be when you grow up? It’s your world now.” Also, VOTE IN EVERY GOD DAMN ELECTION, and don’t vote for people like Donald Trump (even if you’re really really mad at everyone else). The bullies will never help you.

(Hmmm, there was a close one and I don’t want to answer this, thnx.)

This is the million dollar question, and something we step through daily. If you're making pop music, the two are essentially the same. If you’re really entertaining people with music, it’s because it’s good music. If it’s truly good music, logic follows that it’s entertaining. But if we had to choose, we'd be anything but musicians if making music was all that was involved. If it was just the act of making music, say in a cave or deserted island, that sounds pretty inanimate. It’s connecting with people, and facilitating them connecting with each other, that makes this thing tick for us.