An Interview with Sarah Shook 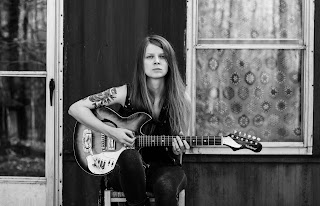 I first got to know the voice of badass bad girl country/rock heartbreaker Sarah Shook a couple years back, while perusing the Hopscotch lineup for treasure. With Sarah Shook, I hit the mother lode. I was bowled over by Shook's vocals. She's what you might call the real deal. Her songs are raw, capturing the messiness of real life in a way that's incredibly engaging and relatable. The rebel spirit of rock and the wildness of old school country is alive and well in this firecracker.

Get to know a little bit about Sarah below (for example, she's got killer taste in music), and be sure you keep a watchful eye on Shook and her Disarmers.

It's honestly hard to choose just one, it's been an absolute killer good time out here. We just played an over-capacity show in Philadelphia to the best damn audience anyone could ask for, we sang, shorted, and cried together. Drank like all the whiskey. And then I climbed a train track trestle. Definitely a highlight.

I've been on a Black Angels kick for a long damn while here lately, their entire discography is just flooringly great. My buds' band Nest Egg just released a new album, Nothingness Is Not A Curse, and I've been rockin' that shit in the band van. Santigold, Mitski, L.A. Witch, Cigarettes After Sex, Jacuzzi Boys. So many good bands out there right now.

Absolutely not, but I'm an adrenaline junkie so it works out.

Not to me, no. I love the cities we visit and play for their diversity and unique spirit. I love how places have quirks just like we humans do.

In that we're out here totally doin' our own thing, hell yeah. We don't sound like anybody out there right now last time I checked. I get the whole "who are your influences" question a lot and the short answer is none. Life. Experiences. Human interaction. Those are my influences.

Right now I play a hollowbody Gretsch Synchromatic, it's a reissue of a 1940s model. Also I play a Harmony Rebel electric and am lookin forward to incorporating that into our live shows.

All the time. It's hard to find and strike a balance, to sort through what you can and can't help with. If I had like 6 of me I would answer every question everyone ever asked me every time. I always feel like I'm not doing enough to help people and that can be frustrating.

Sing with me, laugh with me, shout with me, cry with me. I wanna see fists pumping in the air. Dance around. Pogo. Headbang. You do you. But please always treat the venue with respect and always tip your bartender AT LEAST 20%.

If I were a lone pine at the foot of a mountain the song coming to me would be the avalanche.

I would like someone to ask me if they can fly my entire band to the Bahamas for a week long vacation, food, lodging, flip flop rentals, all expenses paid. By god, these boys deserve it.

Yes. I have also had other kinds of block-outs on stage. I rely very heavily on muscle memory during live shows.

I have like a million songs to write. I already love knowing what it's gonna feel like when I write the next one. And it's the best goddamn feeling in the world.

Learn an instrument, get as good as ya can at it, sneak out of your window at night, and play at many shows as you possibly can. Make friends. Build a music community. Make it inclusive and safe for women, POC, trans and non-binary folks, and humans of all ability levels.

When I was a super new infant there was a fire in my family's house. I was so new they grabbed my older sister and fled the house and LITERALLY FORGOT ME. Luckily my poor mother remembered in the nick of time and ran back in, as she scooped me out of my crib the wall behind it burst into flame. I don't remember any of this but yeah. Too real.