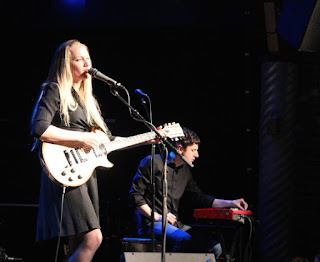 I knew it was going to be a good night when, in the middle of the first song of The Weather Station's set at Jammin Java, Tamara Lindeman dissolved into fits of uncontrollable giggles. Midway through opening volley "Don't Understand," something appeared amiss, and Lindeman swapped out lyrics for the bemused "I don't understand why I started this song in the wrong key" as she fiddled with her guitar. "Don't Understand" was eventually abandoned, but from then on the mood was light, the crowd was captivated, and Lindeman and her band were nigh on perfect.

The thing about The Weather Station is that if you actually read through Lindeman's lyrics, they take on a rather poetic quality, each carefully-chosen phrase capturing moods and experiences and truths and expressing all of that in a way that's both captivating and relatable. Lindeman's songs could almost do double duty in that respect, song and poem. That gift for songcraft becomes even more evident when seeing The Weather Station in person. Song after song was played in a way that surpassed the recorded version, these nuanced folk songs possessed with limitless appeal anchored solidly by the undeniable majesty of Lindeman's stately vocals.

It's difficult to cherry-pick highlights from a set like this, but the back-to-back tandem of "Impossible" and "You And I (On The Other Side of The World)" shone so brightly, the solid drumbeat and plucky rhythm section boosting the former while Lindeman's voice hit peak levels of beautiful breathlessness during the latter. The lively "Kept It All To Myself" was another treasure, jaunty as all get out but in an almost weary way. There's such a strength in The Weather Station's songs, a grounded elegance. A gorgeous Dion cover and a stunning version of my very favorite Weather Station song, "Way It Is, Way It Could Be," filled out a set that seemed to fly by.

I'd already seen The Weather Station once before, several years back at one of Hopscotch's excellent weekends, but this time I was well and truly left speechless. When it was all over, I walked out into the chill of sprinter, warmed by what I was lucky enough to witness. If you get the chance to see Lindeman and her team live, make sure you do so.


[words and photo of The Weather Station by Megan Petty]