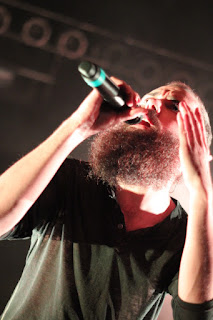 When Rainbow Kitten Surprise first pinged on my radar, it was in 2016 while I was checking out the offerings for that year's Savannah Stopover. Back then I opined that they were surely a "must-see" band...fast forward a couple years, and I'm happy to say I was right on the money.

A packed house in DC on a Sunday night is no small feat, and the 9:30 Club was humid and humming with the anticipation of a buzzing, full-to-the-rafters crowd as they waited on the night's main event. As soon as they stepped onto the stage, the boys from Boone, North Carolina made sure one and all were having themselves a heck of a good time.

The band was in top form as they churned through song after song, spinning around the stage with an impossible collective energy. This force was beamed right back at the band from the crowd, a group who were prone to singing along and plenty of hooting and hollering in approval.

Earnest to the point of being disarming, RKS absolutely steamrolled through the set, leaving an enraptured audience in their wake. Their sound has an intricacy, and a shapeshifting quality that incorporates elements of good old Southern rock, funk, blue-eyed soul, and a little bit of the backwoods. To my ears, this is a band that is truly in their element when they're playing live. It's obvious that they all love what they're doing, love to be dancing around and playing these songs that resonate with so many. I wouldn't be at all surprised if Rainbow Kitten Surprise had wanted to play all night long, and the 9:30 Club crowd wouldn't have minded one bit if they had.

It's wild to think that in just a few short years, these Carolinians are now headlining (and selling out) spots like the 9:30. But having spent some time in their presence, I'm not at all surprised. Kudos to these kittens.


[words and photo of Rainbow Kitten Surprise by Megan Petty]