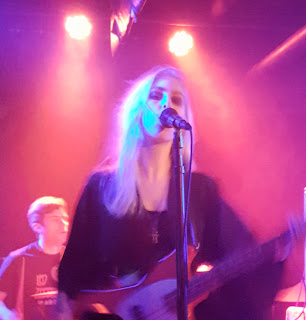 Intrepid Fuzzy Logic Intern Andrew is constantly in search of good live sounds, and the following is what transpired when he took in INHEAVEN at the U Street Music Hall. When he's not getting his intern on, Andrew is the DC representative for UK campaign Girls Against, who look to raise awareness and ultimately end sexual harassment at gigs.

Touted by the NME as being “indie’s most dangerously exciting debut-album- darlings,” South London’s premier fuzzy dream rockers, INHEAVEN, set their sights on winning over the “lonely kids of the USA” while supporting the glittery goth pop of Pale Waves for a month-long British invasion.

Having taken on most of the West Coast on their journey, INHEAVEN finally made their way to U Street Music Hall as their first East Coast stop en route to their inaugural US headline show at the appropriately-named “Baby’s All Right" in Brooklyn.

I first discovered INHEAVEN after hearing about their brief shoutout to Girls Against in their music video for their pearly-gated single “Drift,” back in 2016. After sorting through the endless praise and hoopla through our Twitter timeline, I gained familiarity with their budding catalog of punchy and driving indie rock soaked in ethereal waves. Their ascension in the British indie scene stemmed from their rowdy yet inclusive moshpits, experience supporting bands like Blossoms, Circa Waves, and The Magic Gang, and performing on the John Peel stage at Glastonbury. INHEAVEN developed a tremendous buzz as Britain’s next big indie hopefuls.

However, as I queued outside the narrow bottleneck of the notorious U Street Music Hall, I
found myself adrift in a sea of gleeful goths, worrying about whether INHEAVEN would be subjected to support band indifference from the Pale Waves contingent. Pale Waves are a talented troop no doubt, but I was hoping there would be those looking forward to the fiery “Treats” INHEAVEN had in store. Once inside, the crowd grew to a sea of monochromatic teens traced in heavy mascara looking forward to the headliners. It certainly looked like a tough task for the dream rockers to win over this DC crowd. 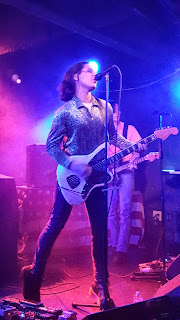 Swirls of flanger and piledriving bass slowly filled U Hall for INHEAVEN as they finally walked on stage and took control with a respectable applause. Frontman James Taylor made his presence and talent known as he laid down a heavy rallying cry for DC to appreciate, opening with the track “Bitter Town.” Met with great applause from an admittedly shy and polite mass, the Londoners then gave DC a track met with great sincerity and innocence with “Stupid Things.” Matched with a similar framework of chord progression as the 80s classic,“I Melt With You,” Taylor conjured up imagery that could be paired with a seminal John Hughes film with churning, fuzzy phantasmagoria.

Enthusiasm from the timid audience eventually came to be, especially during the band's hit single, “Vultures.” A cheer of recognition came from the crowd as the potent rhythms and
precision from drummer Joe Lazarus and bassist Chloe Little sparked the overdrive. Little’s big blue eyes gazed on the crowd as she exhibited a cheeky, yet sinister smirk to those now aware of what was to come. Little and Taylor’s vocals shredded through a tight punk rock groove and pulled the trigger on a sonic blunderbuss that truly highlighted their influences (Sonic Youth, Smashing Pumpkins, Black Sabbath, etc.).

INHEAVEN, who are unapologetic in their use of political motifs (American in particular) in their songwriting and iconography, scattered and cleverly applied their social commentary like fresh paint onto a canvas. Equipped with his Fender Jaguar and in tandem with his six-stringed compadre, Jake Lucas, Taylor achieved his goal of creating “sonic landscapes and walls of sound” to deliver a youthful, guttural force that merges well with his politically charged yet sincere songwriting. INHEAVEN’s angsty forcefulness is complimented with their soft decadence. They brilliantly let these themes intermingle and weave their way into their narrative and invite anyone who listens to join in.

Those accustomed to the confinement and quaking sound of U Street Music Hall can appreciate the intense intimacy a band can generate with its audience in that kind of venue. Mindful and clever in their onstage approach, INHEAVEN took stage armed with all the tools and experience of their days in the British indie circuit to fuel and inspire those who were unacquainted with their material. They also reminded and cajoled those who had forgotten how fun and spontaneous rock and roll can be while still being relevant and brazen in its commentary. I certainly hope that South London’s finest will return for a well-deserved headline tour of America to be met with open arms from audiences that will mosh away and frolic freely in those “sonic landscapes.”


[words and photos of INHEAVEN by Andrew JW Koh]