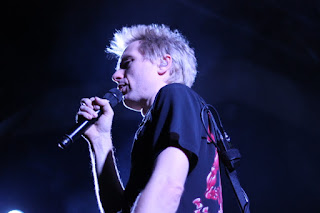 A few weeks ago, I came across some old photos - actual, tangible photos, remember those? - from the last time I saw Franz Ferdinand live. There were white belts, skinny trousers, and tucked-in, collared shirts aplenty, and though the photos and my memory are both on the grainy, hazy side, I can still remember being blown away by that show. After all, back in the early 2000s, Franz Ferdinand was a hell of a live band. Turns out, over a decade later, they still are. This particular Franz Ferdinand show, at the very same 9:30 Club where I'd last seen them, was probably the most fun I've had at a gig so far this year.

Electric from the start, it was clear that this wasn't going to be anything other than an absolute firecracker of a show. Frontfellow Alex Kapranos, hair bleached in a way that called to mind the one and only Billy Idol, proved to be the consummate showman once again, high-kicking and shimmying and purring his way all over the stage. And the crowd hung on his every word and every kick. When the magnetic Mr. Kapranos asked for arms in the air, you'd better believe that arms went in the air. After all, who can resist that velvet voice? Spoiler alert: not me.

There seemed to be an urgency to the set, as though the band was willing everyone to have a damn fine time. Which, of course, they did, thanks to the endless wave of excellence coming from the stage. The newer songs and their naughty, nouveau wave disco pop slant fit right in amongst the older, irresistibly angular treasures. It must be said that as a five-piece, Franz Ferdinand truly excels - playful keys added to the delirious, decadent danceability of the set.

For nostalgic reasons, my favorite songs of the night were old favorites like "The Dark of The Matinee," "Darts of Pleasure," "Take Me Out," and "Michael," though every single song was a triumph. Songs from the band's newest record, Always Ascending, received just as much in the way of a roar from the crowd as did more tenured numbers. As the Glasgow-based gents whipped the crowd into a giddy, loved-up frenzy, they did so under a banner bearing their name that borrowed the font from legendary Glasgow venue the Barrowlands. You can take the boys out of Glasgow, but you can't take the Glasgow out of the boys. And that, friends, is exactly how it should be.


[words and photo of Franz Ferdinand by Megan Petty]