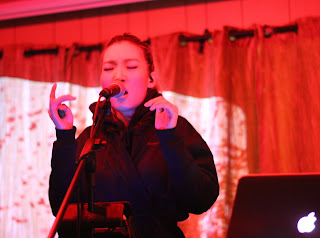 Intrepid mysterious Special Guest Star The Paper went in search of good live sounds, and the following is what transpired when he took in CIFIKA at the Songbyrd Music House.

CIFIKA, the moniker under which Youson makes her bewitching music, stopped by Songbyrd on her first ever US tour in support of her latest EP, Prism. A small but clearly excited crowd gathered early. Thanks to our conversation prior to the show, I felt impatient and restless as I awaited her set. There was every indication that it would be an immense treat. What I got was near perfection.

Youson followed my personal favorite band practice of diminutively entering the stage and jumping right into song. The skillfully-crafted, catchy beats drew everyone closer, and a group of three friends in the front row wasted no time getting down to dancing. Singing in both English and Korean, Youson proved that music is an universal language.

Her intense expressions and emotional gestures painted words to the meaning and feelings conveyed by the sound. I could tell when a song took an upbeat turn when a coy grin overtook her stoic face, as if she had just that second remembered a happy moment. I was reminded of something she said earlier, that she makes music for herself. She seemed intent on telling her stories, in a confessional way that almost came across as being oblivious to the audience. This, more than her serene yet commanding voice, was completely compelling. 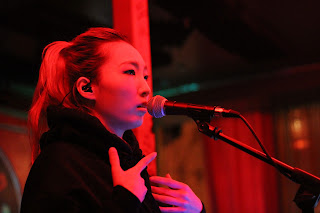 The only flaw was that the production was flawless. The weave and collage of pitches and rhythms were so meticulous, I could hear the sewing needle as it painstakingly constructed a masterpiece. Every stitch was frighteningly deliberate. Finally, she made a rare, brief pause to thank the crowd for coming and a reply from somewhere in the crowd in Korean led her to crack a smile. Who knew perfection could be human? The far too short half hour set was the night's only downfall.

Youson more than compensated by generously engaging with everyone in attendance after the show. It was the first time in the hundreds of shows I have seen over the years that seemingly everyone stayed for either pictures, autographs, or both.


[words and photos of CIFIKA by The Paper]