An Interview With Genders 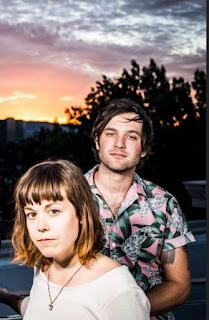 Portlanders Genders was another discovery made while perusing this year's Treefort lineup. I was charmed by their intricate, fuzzy sunset dreamgazing, songs that are perfect for gazing upwards at starry skies and endless blue alike.

Many thanks to the creative partnership that is Maggie Morris and Stephen Leisy for putting their thinking caps on and giving As to my Qs. Read on to learn some of what makes Genders tick, and be sure you keep an eye on them to see what's next for this talented Pacific Northwest outfit.

Maggie: I would definitely say Treefort 2017 was the most exciting music thing last year. Genders opened for Mac Demarco at the El Korah, and my other band Sunbathe got to open the Sunday show at the Linen building with Karl Blau. Also getting to see Jonathan Richman and meeting Angel Olsen were both super special moments for me...just a really good year at Treefort, all around!

Stephen: Ditto what Maggie said about Treefort. It was so fun! Also, we played a music fest in Leavenworth, WA that was pretty cool but mostly because we got to play a high-stakes game of farkle AND have a pretty epic snow/ice ball fight in the parking lot. I think everyone at the festival thought we were twelve year olds.

S: Land of Talk, Ty Segall, Alvvays, Angel O, Wand and so many others.

M: I have a pretty constant fear of death, so not really.

S: Yeah, I'm not that great on airplanes either. It takes a bit of mental preparation for me to feel at ease.

M: Not really, I'm writing from Austin right now, and every major city feels pretty different to me. When you get out to the suburbs I would definitely say that all of it looks the same. Unfortunately the corporatization of America makes it pretty sterile and boring when you get out there.

M: I don't have a particular agenda, except trying to express my own experience of being alive. I like to leave the lyrics open to interpretation.

S: Be excellent to each other.

S: New Zealand would be chill.

M: That would be really silly to say yes...I think all art repeats itself in some way, we are always taking inspiration from something else. Hopefully when you create something you put your own spin on things and make it yours, but anyone that thinks they are creating art in a vacuum is probably very egotistical.

M: I play a 1972 Fender Mustang, and it is the nicest thing I have ever owned.

S: I play a '63 Jazzmaster for more local stuff but generally take a very altered J Mascis Squier Jazz Master on the road.

M: Some of my friends ask for advice, sometimes I give it unsolicited.

M: Sometimes people have told me they got chills several times during our sets, some people have said they cried... those are pretty cool visceral reactions. I like to make people cry.

S: It's always nice when they are good to each other while letting their freak flags fly in their own way. One time someone drew a picture of us while we played. That was pretty neat.

M: I usually just jam in my bedroom, but sometimes I get some great vocal melodies that pop into my head while I'm biking or running.

S: Take five songs you like, mix them all together and you got yerself a song going.

M: Something about marrying someone for Canadian/European citizenship?

S: Can't really think of one.

M: Yes, it was really awkward.

M: To live in Mexico and become fluent in Spanish.

S: To live without regrets.

M: I was a loser in high school with no friends and ate lunch in the art classroom all the time, so my advice would be to not get hung up on your high school experience. There's a ton of cool shit waiting for you out in the world, and high school is by no means the highlight of your life.

S: Stay away from Tide pods.

S: We hit a deer on tour once and totaled our van. It was pretty scary.

M: I would definitely say more of a musician, obviously there has to be some element of entertaining when you perform...but sometimes I don't feel very "entertaining." Sometimes I can get on a roll with the jokes on stage, but that kinda just depends on my mood and the energy of the audience.