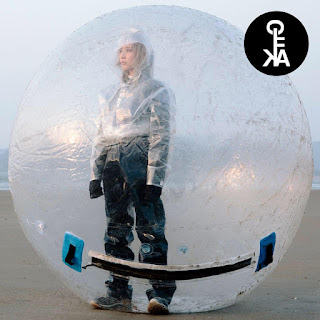 "Why did you want to interview me?" Youson asked me. We were sitting in the green room at Songbyrd, one of the last stops on her first ever tour. I didn't have a good answer at the time. I was curious about what makes CIFIKA, the moniker under which she makes music, tick, and by the end of our almost hour long conversation, I had a much better idea. The Korean producer exudes a palpable conviction that reverberates long after the last note.

What are you currently listening to?

I've been listening to the soundtrack from Annihilation, the movie that just came out, it's by Ben Salisbury and Geoff Barrow - they did the whole soundtrack for this movie and it's awesome. It's dark, atmospheric, ambient electronic and it fits very well. They did a very good job.

Have you seen the movie?

Yes, I watched it with my videographer and my stylist and we had an awesome time.

Maria Sherman, who talks about music and pop culture, wrote a piece last Friday arguing that no band should play for more than 20 minutes - thoughts?

I read it! I do agree with her, because - well, did she specifically say new musicians or opening musicians, or every musician?

I don't agree with that, but for opening musicians, I think it has to be shorter than at least 45 minutes, only because people are expecting to see the actual musician they paid for, and I don't think it's very efficient for audiences to wait for an hour and a half until the musicians come up on stage. Music is something you really have to focus when you listen to it, so it would be really boring for the audience to focus on two new acts and the main musician. I think twenty minutes is a good glimpse of what the opening musicians are, and it makes more interesting to the audience.

What about the audience that is there not for the headlining musician, but for the opening band?

I don't think people actually go to see the opening musicians, to pay the full fee for the show just for the opening musician. I would wait until the opening musician is the main act. I'm not saying twenty minutes is enough, but less than forty minutes. Maybe about thirty minutes? But I have a case which I found really interesting. I went to a show in LA, and a band called High As A Kite opened and I really liked them. And that's when I really got into the band and listened to them.

High As A Kite is great.

You know the band?

Yes. So Spotify had its IPO yesterday, and the price already dropped today. Any thoughts about Spotify and the music industry in general?

I had to ask what the IPO was to my manager. I use Spotify all the time and that's how I find new music, and I think Spotify going public is better than Spotify's owner keeping all the money to themselves. I don't know the business side really, and how it'll affect the music industry, but we musicians do deserve more, more profit from Spotify.

I completely agree. In keeping with the theme, there's not many Korean bands, or Asian bands for that matter, that have made it in the US. There's only really PSY that comes to mind. Why do you think Chinese/Japanese/Korean acts have trouble breaking into the US?

There are acts like BTS and Girls' Generation that are pretty popular in America but I think mainly there's a huge culture difference. I think that's the main reason why Asian acts will never make it big in America. Americans will never understand what they're trying to say in the lyrics and the process of making music is so different. Like in K-pop especially, ten producers can come through to make one song, so it's like everything is too perfect...and I don't think it's very artistic, in terms of music. I don't want to sound mean and I respect any artist in the field, but I don't necessarily admire them as an artist.

So you're near the end of your first tour. Which city was your favorite? What would you do differently next time?

It's my very first tour in my life, so it was really difficult to get used to gigs...clubs to go to another club and it was very hard for me to digest all that, in such a short term of scheduling. My favorite venue was in LA. I loved the venue itself. It was called Moroccan Lounge. They had the best sound system, they had really nice light, everything sounded so much better. There were a lot of friends I made while living in LA so I was happy to see them and it was a lot of good energy. But next time I'll definitely be more professional in preparing my performance and I want to show more different sides - music I do with what I have, or visualize fashion, in terms of visuals. I want to prepare more. I think I can do so much better now because I already experienced once.

What are your plans immediately after tour? What can your fans expect?

I have upcoming collaborations, including Korean artist, one with a Canadian artist and one with a Japanese artist, so I have to do that. I go back immediately and I have one Japanese gig... I've been writing sketches throughout the tour and so I plan on releasing that later. The Japan gig is April 28? I'm not sure....

Well, that was all the questions I had prepared...let's do some silly ones?

Uh... Michael Jackson. Well, he made commercials for it, doesn't mean he likes it. What hobbies do you have?

Do you have any aspirations, musically or otherwise?

I want to score a movie. I believe that will be a good challenge. First I have to get better.

Would you consider writing the soundtrack without watching the movie?

No. You have to watch the movie. You have to match the notes, the music to what's happening on screen. Like I can make music from your shirt.

[Look down at my plaid shirt puzzled]

There's a pattern to it. It's got varying thicknesses. Take this curtain for example. [Youson walks over to a hanging curtain nearby that has different shades.] I can make a heavier synth for the wider part and place a lighter synth next to it.

There are visual components to music.

Right. The DIY scene in Korea is just starting to grow. Why do you think that is? The Japanese underground scene has been around for much longer.

People want real music. DIY music. Have you listened to my latest? What did you think?

Yea, Prism. Um, it's good. Nothing groundbreaking but good.

What do you mean groundbreaking?

Um, it's a mixture of electro, pop, techno... nothing that hasn't been done before you know?

Next time I want to make something groundbreaking! [There's a determination in her voice that stays with you.] It would be recorded in a perfect enviornment with the best producer, best mixer, best engineer. Do you have a good sound system?

No, that's really expensive. And I would need to build a room with good acoustics as well.

[Interview by Special Guest Star The Paper, and has been edited for the sake of brevity]