An Interview with Bria Salmena (FRIGS) 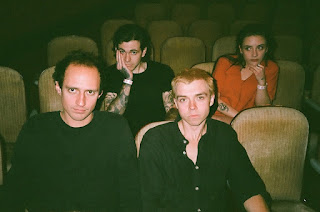 Toronto outfit FRIGS makes seriously captivating, intelligent post punk clamor. The vocal performance of Bria Salmena guides the music, she's the snarling sneer/unwavering, uncomfortable stare of a voice that fits the dark angles of the songs like a glove. They've been a busy band lately, what with being out on the road touring their debut record Basic Behaviour (released earlier this year on Arts & Crafts). Salmena took some time to answer a few Beatles-y questions, check out what she had to say as you check out some of the band's most excellent noise.
__________________________________________________________

Bria Selmena: Opening for Slowdive at Massey Hall in Toronto.

Depends how much Xanax we've had.

In America that happens sometimes.

We try to refer them elsewhere.

I don’t wanna go down that wormhole.