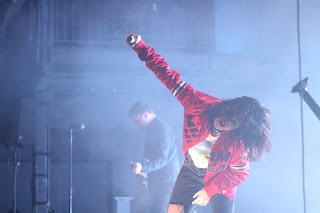 Intrepid mysterious Special Guest Star The Paper went in search of good live sounds, and the following is what transpired when he took in Sleigh Bells at the 9:30 Club.

The first time I saw Sleigh Bells remains the worst best concert of my life. It was everything I wanted except I was literally squeezed, shoved, and bounced around the entire show. Suffice to say I was eagerly looking forward to my sophomore experience. What transpired would have led me to fall head over heels regardless, so given it was Valentine's Day it only made the fall harder and further. 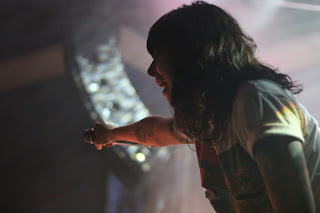 And by fall I mean rock. Rock in love. That's the Sleigh Bells way. And by rock I mean jump. And by jump, well, I'm sure you get the idea. It was a non-stop supersonic flight from the moment Alexis walked onto the pitch black stage to when the lights came on over an hour later. The band's trademark snappy syncopation mingling with her vivacious vocals, guffawing guitars, and deafening drumbeats sent the sold out crowd into a fevered frenzy. That's not just alliteration for style. In the words of a passing concertgoer, even though he didn't want the show to end, it was so hot that he was glad it did. The frenzy somehow grew in incontrovertible intensity each time Alexis approached the edge of the stage, arms outstretched. It made me want to be a rock star.

And this was before she crowd surfed. 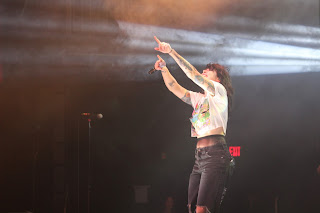 Thankfully, this time I was protected from the mayhem within the confines of the media box. Then I surprised myself when I felt a bit sad. It's not a complete Sleigh Bells experience without getting elbowed at least once. Alas, I just couldn't risk damage to my camera.

In perfect Valentine's fashion, the band closed the set with "Rill Rill." Alexis making a heart shape with her hands each time she delivered the catchy chorus could only be described as El. Oh. Vee. Eee. 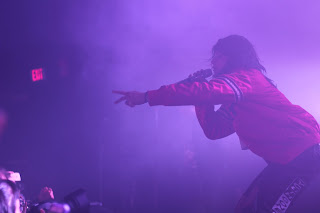 "There's just one thing I want to say," she said, visibly tired at the conclusion of the encore but the gravity in her voice captivated the crowd. She conveyed her appreciation that every night people treat each other with respect. She's absolutely right. After all, the media box was merely tape on the floor.


[words and photos of Sleigh Bells by The Paper]