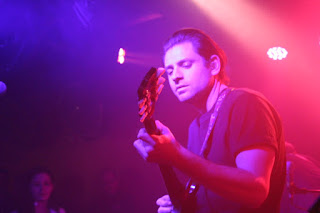 Full disclosure: I crush a lot. And I was already well on my way to being a certified Lo Moon fangirl before stepping foot into DC9 the evening of March 25. I left that show feeling that warm, wonderful glow that can only come from experiencing your new favorite band play a near-flawless gig. Because that's exactly what happened on this particular Sunday night in Washington, DC. With Lo Moon, it's no mere crush.

In point of fact, I was so transfixed by the first two songs (the hypnotic, slow burning statement of intent that is "This Is It" and the sultry shimmy of "The Right Thing") that I didn't even come down to earth to take a note until the third song of the set. 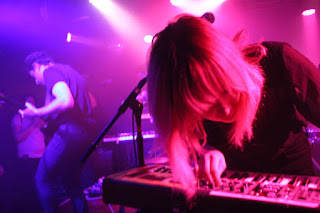 By the time the LA outfit launched into the magnificence of "Thorns," there was a slight haze in the room, a haze that added to the palpable sensuousness of the song. They followed up that treasure with an incredibly uplifting rendition of "Wonderful Life." I found myself constantly marveling that the record the band happened to be touring, the newly-released self-titled record, is their first long player. Every song was played with an intensity and purpose that isn't something you expect from a band so early in their lifespan. It's hard to imagine that it's been just over a year since they first landed on my radar, and yet here they were, absolutely in control. 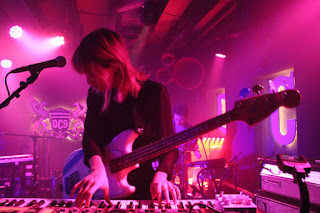 One of Matt's favorite songs, "Bonny" by Prefab Sprout, was included in the set, Lowell's fallen angel vocals taking the 80s nugget to places that seemed somehow predestined. Songs like "Tried To Make You My Own" and "My Money" were new to my ears that night, but imbued that same sense of mastery as the songs I was already familiar with. The heightened drama, thanks to a masterful use of sonic tension and release, and the sheer force that these songs convey is powerful. 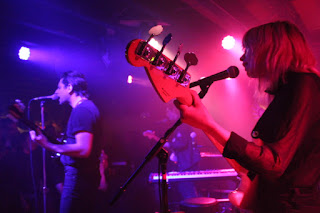 It wasn't all about taking the Sunday night crowd's breath away, the band was engaging between songs as well. Before "My Money," Lowell proposed building a rotating stage in DC9 so that the band could be better seen by/interact with everyone. At another point, the confession was made that the band wasn't sure what night it was (a statement that drew a hearty collective laugh from the assembled). The encore, too, was good for a laugh. The band decided to skip the pretense of leaving the stage, Lowell launching into a spine-tingling solo version of "All In" while the others took a brief bar break. And then, somehow, the end was near. And the end meant "Loveless." 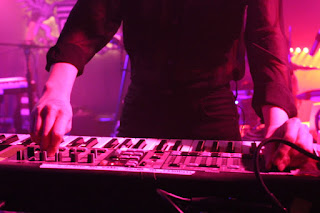 "This is a song called 'Loveless,'" Matt announced, eliciting hoots and hollers from a crowd that had been waiting all night to hear the band's initial masterstroke. It was worth the wait. "Loveless" was, quite simply, transcendent. But then, the same could be said about the entire set. After the lights came up, I wished that I'd been able to record the entire show, because this was one of those special nights. And this is one of those special bands.

[words and photos of Lo Moon by Megan Petty]