An Interview with Cones 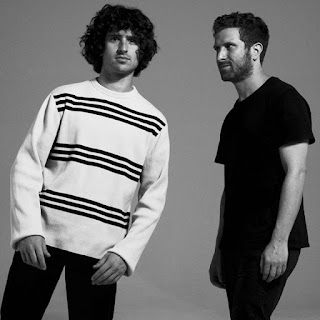 The more I listen to Cones, the more I feel this wonderful duality of something nostalgic entangled with something here and now. Which, if you check out one of the answers in the interview below, is a sentiment that plays right into their hands. In a way, too, there's an innocence to their slinkiness, probably deceptively so because it's clear that despite Cones being a relatively new endeavor, these two aren't exactly wet behind the ears. But there's a charming lightness, a twilight sweetness to the sounds this brotherly duo makes, breathless and icy cool dream pop.

Brothers Jonathan and Michael Rosen kindly took some time to answer the Beatles questions, read on to see what Iceland, Swimmy, and the Great American Music Hall mean to the world of Cones. And stay tuned for much more from this simply delightful band of brothers.

Michael Rosen: There have been a lot of exciting moments this past year. We've only been a band for a little over a year, and everything has been developing very naturally. I think my favorite moment was our first hometown show at The Bootleg in Los Angeles almost a year ago exactly. It just felt right.

Jonathan Rosen: Well I have to say The Beatles. Recently I’ve been listening to a lot of Joni Mitchell again. And Roy Harper. And this amazing Japanese band from the 70s called Jaywalk that I found in a store in Tokyo. I’m kind of all over the place at the moment. Lots of Chris Cohen all the time. And music by my friends. I think my favorite genre right now is “music by my friends."

MR: Yes, completely. The trick is to convince yourself nothing really matters and that you are worthless. The trouble comes after you land, when you gotta pick yourself back up.

MR: No. We live in Los Angeles, which is truly unlike any city. And we're from San Francisco, which looks very different. But I get the question. There's an aspect of all cities that feel the same.

MR: We're just writing music that feels good to us, and we hope that it evokes a specific feeling in each listener. Not something specific that we have in mind, more specific to the audience. I guess something nostalgic and new.

JR: On stage I play a Fender Duo-Sonic. It’s bright orange and looks like a cone. It’s not the nastiest guitar out there but it gets the job done. When I write, it’s almost always on acoustic. I recently acquired a Gibson LG2. It’s my dream guitar. It doesn’t look like a cone but it’s truly special.

MR: We ask each other for advice all of the time.

JR: I’d like people to know every word and be mouthing along, just in case I forget a lyric and need somebody to signal me. It would be cool if there was some more air guitar going on too. Maybe air bass actually. I’d also love it if the crowd demanded that I stage dive. Really though it’s just about movement. Nothing feels better and more encouraging then seeing people bounce around in the audience.

JR: I have several approaches to songwriting. Sometimes I designate a few hours to writing, treating it like an assignment. Other times I am just sitting around strumming the guitar and a melody emerges out of nowhere, and a few hours later the bulk of a song has been written. Those are my favorite songs. I always write on acoustic guitar. For me it feels important to be able to play every song solo, just vocals and acoustic, despite the complexity of the actual recording and arrangement. Lyrics always come last, and I tend to write those while in some state of motion - either driving or hiking or pacing around the neighborhood. I love to write music in my car. I wrote one of our songs in my car waiting for my clothes to dry at the laundromat. Then there are some tunes that start with a riff or loop that Michael writes, and then I write a melody on top and expand upon the idea...Once the song is written, I bring it to the studio and arrange it with Michael, and our bud Adam Gunther who we are making this new record with.

JR: Our sound is called Swimmy - after the goldfish Michael and I had growing up.

JR: When I was twelve years old I played my first show ever. It was a talent show. My “band” covered "God Save The Queen" and I was singing. Halfway through the song I forgot the lyrics, probably because I was focusing too hard on doing a British accent. I walked off-stage and the band just kept playing. Backstage I was desperately trying to remember the lyrics of the next verse. I finally remembered them, walked back out there, and forgot them again immediately.

MR: Playing at Great American Music Hall in San Francisco. That venue holds my best memories of being a teenager and going to shows.

MR: Go to as many shows as you can. It's that time in your life, that feeling of experiencing new music, that propels you the rest of your life.

JR: I was camping in Wyoming and I walked directly into a jagged tree limb. The branch went into my face, leaving a gash that began about a millimeter away from my eyeball. I was bleeding profusely, and hundreds of miles away from civilization. If the branch had actually entered my eyeball, I’m not sure what would’ve happened. Maybe death? I don’t know.

JR: Combo. Actually probably more of an entertainer for me. I’m not a very technical musician. Michael though, he’d probably say combo as well but more heavy on the musician.