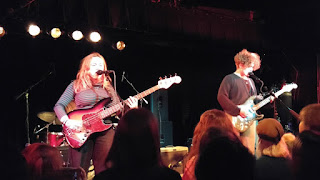 Intrepid mysterious Special Guest Star The Paper went in search of good live sounds, and the following is what transpired when he took in Girlpool at the Black Cat.

Ever since I stumbled upon my favorite band when I first saw them perform, I've made a hobby out of seeing bands I've never heard of before. Discovering bands in this manner has been incredibly rewarding. That said, Girlpool reminded me that there is tremendous joy in seeing a familiar band. It helps that Powerplant ranks in my top ten records of last year. And embarrassingly, this is the point where I realize that this is the exact same sentiment I had the last time I saw them.

Which I guess reinforces my point.

There's an irrefutable force in Cloe and Harmony's voices that's irresistible even though they are so soft they're almost brittle. They carry the loving tenderness of a mother singing to her baby. This much is evident on the record, but listening to it live led to a revelation. A mother's tenderness exhibits enormous strength. Or perhaps it takes courage to bestow a mother's tenderness. Needless to say, it fills one with a touching warmth that feels impenetrable. This is especially true when Harmony cooed, "I faked global warming just to get close to you." And so I found myself swaying like a lullaby to the gentle rocking of said voices.

Then there's the matter of the drummer. I found myself tiptoeing for most of the set to the beat. It was satisfyingly loud, which would logically create a jarring juxtaposition against the relatively muted vocals except that it did not. Instead, the drumming offered steady confirmation of the power inherent in the duo's singing. And that steady, thunderous underpinning made me want to switch my sexuality to the bass drum.

My favorite part of the show was wholly unrelated to the music,  however. Some guy shouted his request multiple times for the band to play "American Beauty" from their debut EP. Near the end of the set, Harmony finally announced that they would play the song before quickly adding "just kidding." Talk about a punch line.


[words and photo of Girlpool by The Paper]