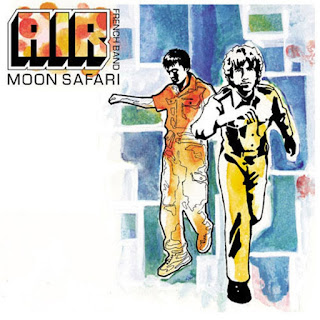 It feels like only yesterday that this album came out. But it wasn't! Let's wish a very happy 20th anniversary to Air's Moon Safari, and revisit just what makes this such a special record.

When this record came out I was in college, thought I knew everything about everything, and was totally into British bands and basically nothing else. Air started to change all of that.

With Moon Safari, the duo brought such a suave and chic sound to the music landscape. It sounded totally unlike anything else I was listening to at the time, and because of that it was a big deal to listen to this particular record. It's actually been a long time since I've sat down with this one, and even after a lengthy absence it still sends chills up my spine. Does it get any more spine-tinglingly atmospheric than opening rainy day epic "La Femme D'Argent?" Not likely. What about "Sexy Boy," the infectiously repetitive, slinky little number that was impossible to remove from the brain once it was stuck there? And the velvety "Talisman," the impossibly magnetic, late night work of black magic?

For me, the weak moment was "Remember," and I still have a hard time with that one, though I am growing quite fond of the slightly spooky feel to the theremin-like sound looping along in the background. I definitely spent more time with the front half of the album than the back end, but songs like the effervescent sparkler "Ce Matin La" and the come hither closing track "Le Voyage De Penelope" offer plenty to like about the closing stages of Moon Safari.

Records like this must have been ahead of their time, because to me these songs sound like they belong right here and right now. Air's celestial, retro-infused record was a hit then, and to me it still sounds like a million bucks.