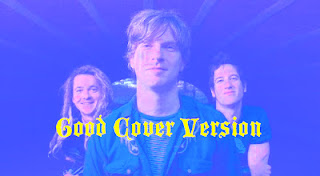 Nada Surf's landmark 2003 record Let Go is one of my all-time favorite albums. It's a treasure from start to finish, classic New York pop full of love, regrets, and more hooks than you can shake a stick at. To celebrate the 15th anniversary of this gem, the band pulled together an album's worth of Let Go covers from folks like Manchester Orchestra, Rogue Wave, The Long Winters, and Aimee Mann (to name just a few) and released it (digital available now, record release is March 2) as Standing at The Gates: The Songs of Nada Surf's Let Go. What's even more awesome about this whole thing is that this is a charity record - supporting the ACLU and the Pablove Foundation.

Charly Bliss got their hands on "The Way You Wear Your Head," the album's eight track. Super saccharine vocals couple with big riffs to make for a new spin on this old favorite, all while keeping true to that unavoidable, undeniable pop undercurrent.