An Interview with KOLARS 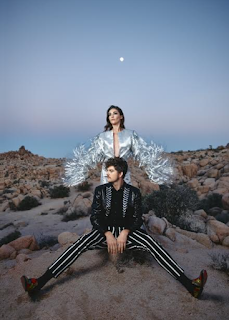 When it comes to dynamic duo KOLARS, it indeed does take two to make it out of sight. With no shortage of panache, the twosome's "desert disco"/"glam-a-billy"/"space blues" easily works its way into the brain, taking over without encountering much resistance. Together this pair creates such a magical energy, the kind that only happens when the universe properly aligns. Rob Kolar and Lauren Brown certainly do make sweet music together. Oh, and speaking of the universe, Conan O'Brien used the term "out of this world" in reference to KOLARS. I wouldn't disagree.

KOLARS is fixing to head out on the road for a string of dates, including a handful of spring festivals (Savannah Stopover, SXSW, and Treefort). Before heading out onto the long and winding road, these lovely people supplied some As to my Qs. Read on for more, check out the band's self-titled 2017 release, and go see them live if you're able to.

Lauren: Honestly, just getting the opportunity to tour. I love it.
Rob: I met a psychic in Savannah who said she had been waiting to meet me for many years. We are now friends and she gives me free spiritual advice.

R: Too many to count. I do love the audio work on Spoon records and know their drummer does a lot of the production, so they deserve a shout out. We recently played with them and they put on such a great live show too. Dialed!

L: Actually yeah. Really scared in cars, calm as can be on airplanes.
R: Yeah. But I'm tall and lanky so I always get off with a crook neck or achey body parts.

L: No way! But every gas station is starting to.
R: What Lauren said.

R: Love. Have fun. Think outside of the box.

R: Japan. Dying to go there and perform. Dyyyyyyying!

R: Depends who you ask. We have old and new influences so we are a little bit future and a little bit past. Who knows.

L: Everyone asks Rob for advice. It's pretty impressive. Sometimes my mom asks me about outfits.
R: Yeah. Lately I've been giving a lot of career advice to other musicians and artistic friends in LA. I've fucked up so many times in my career it's good to let other people know what not to do. I ask Lauren for advice all the time.

R: Do what they feel. Ideally that means don't kill anyone...and have fun. It's nice when they listen. And also dance. We like dancing. Naked dancing is also cool.

L: It is collaborative, but Rob definitely does the heavy lifting. I come in usually when it's a rough draft, and then put in my two cents (or 3 or 4). Sometimes what I add helps the piece, and sometimes it doesn't hahah.
R: Yeah. Lauren tells me what sucks and I usually agree and adjust it. I am trying different ways to compose now. Sometimes I build a song from a drum groove I wanna dance to. Sometimes it's a melody and chords. Occasionally it's a set of lyrics that tell a story. Each method produces unique outcomes.

L: The weirder the better.
R: Agreed. I'm into esoteric questions or stuff that is related to conspiracy, aliens, and perceptions on reality.

L: I like glam-a-billy.
R: Each song has a slightly different style but glam-a-billy, desert disco, space blues are decent descriptions. It's basically taking rock & roll, soul, blues and dance music and exploring a modern way to reinterpret it.

L: Yeah, like once a show, haha. But luckily my body usually has memorized things in a way my brain has not. I just trust my feet to know what they are doing.
R: Yes. Forgetting lyrics and whatnot. Not my favorite thing to experience. Especially if you're in front of a thousand people. I just hope they didn't notice and keep sweating it out.

L: I would love to direct more. I would love to produce plays more. I want to get behind artists I really believe in and help them in any way I can.
R: I would love to act more. Escape myself and experience and alternate reality through a character. Especially a role in fantasy or sci-fi. I'd also love to create a modern musical for Broadway or film or both.

L: Don't let anyone talk you out of pursuing your dreams.
R: Enjoy your youth and pursue what fulfills you. Trust your instincts. They are usually right.

R: Well I sort of did lose a finger but it got sewed back together. I don't have full use of it but they did a decent job. I caught a glass rolling off a counter right as it smashed and sliced my hand really badly. Half of my right ring finger was hanging off my hand and the glass had sliced through all my tendons. It was a stark white kitchen so red blood was everywhere. According to my aunt Kath, whose kitchen it was, there is still blood splattered on the ceiling. It took months to heal (and is still impaired) and I had to have major surgery on it. I'm just glad it wasn't on my fret hand otherwise my guitar playing would have been compromised.

L: Definitely more of an entertainer. I define myself more as a performance artist than a musician. But maybe I shouldn't label myself as anything?
R: Yeah, I agree with Lauren.