An Interview with Adam Prairie (The Hoot Hoots) 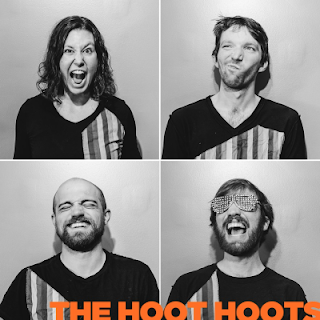 It's not every band that could pull off a song about bloodthirsty bears, or an EP with a serious Star Wars focus, but Seattle's The Hoot Hoots manage both just fine, and manage to make it all sound like a heck of a fine time to boot. You might could say this fuzzed-up party pop outfit is skilled in the art of the over-the-top.

Adam Prairie's vocals are key to the band's good time sound, his 90s college rock-reminiscent tones delivering lyrics with no shortage of grains of salt. But what does Prairie have to say when it comes to fielding this here set of Qs? Check Adam's As below, and if you're fortunate enough to be heading to this year's Treefort Festival, check The Hoot Hoots out up close and in person.

Adam Prairie: We released an new EP called Rainbow Squadron this winter that consists entirely of Star Wars-inspired songs, and we released it at the Pacific Science Center's Laser Dome. They made a custom laser show to accompany us and made some great Star Wars-inspired graphics.

AP: No, planes freak me out. Every time there's the least bit of turbulence I'm clutching my seat having a heart attack.

AP: Not at all! At least not so far. We'll see over the next decade how many cities Amazon assimilates and molds like they have in our backyard in Seattle.

AP: I use an American Telecaster and our bassist Ben uses a Rickenbacker bass.

AP: As long as people are having fun and being respectful of others, they can act however they want!

AP: Our drummer Chris and I write the majority of the songs (Ben wrote one on our last EP though!), so we kinda get it started and then we take the songs to the rest of the band to fill 'em out.

AP: If you wanna make a band, do it as early as you can! There's usually a bit of a learning curve figuring out how to be a band, and it's best to start figuring it all out as soon as you can. Don't be afraid to fuck up either! And don't be afraid to suck! As Jake the Dog would say, Dude, suckin’ at something is the first step to being sorta good at something.

AP: Chris, Holly, and Ben were in another band called Friends and Family and their car flipped on the highway traveling down to Treefort a few years back.