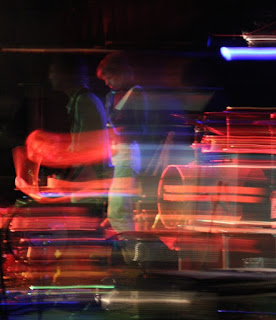 I'd been dying to see Methyl Ethel for quite some time before it finally happened. And it almost didn't happen. I was afraid, thanks to the joys of DC street parking, that I'd miss the entire set as I circled endlessly, hunting for a spot.

As I made my way up the stairs to the Black Cat's mainstage, I was greeted by the sweet sounds of the Aussies I was there to see. Immediately taken by their vibrant, kooky noise, I silently thanked the parking gods.

They're not as overtly psychedelic as some of their countrymen, but the Methyl Ethel dudes can make quite the hazy, but potent, psych-infused racket. This racket, however, is even more interesting, thanks to a rather 80s synthpop aesthetic that colors outside already crossed sonic lines. Little things added so much, from a tiny stutter stop here to a well-placed coo there.

Perhaps because it was the last show of the tour, or perhaps just because chatter wasn't really necessary, the interaction with the crowd wasn't all that frequent. All was well, though, Methyl Ethel was onstage and doing fantastic things.

This is a band that can jauntily jangle with the best of them, or hypnotize with their neo-psych waves of noise. I was blown away by "Ubu," one of my favorite songs of the year, and could have listened to them play just that one song over and over again. As it was, they played for about 45 minutes, and somehow it flew by.

If you've never seen Methyl Ethel live, try hard to fix that. I'm hoping to see them again very soon, because once is definitely not enough.