A Visit to The British Music Experience 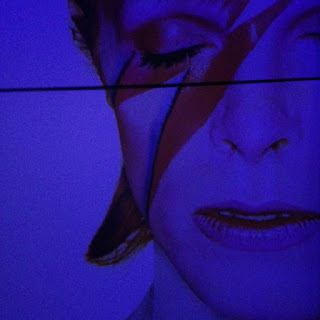 It's hard to think of Liverpool without thinking about music, and the music of a certain fab foursome in particular. There's a lot more to the music of this city than just the Beatles, of course, but those bowl cuts have cast long shadows. They've also helped cement Liverpool's reputation as a music-loving city.

After all, music is what brought me back to Liverpool this past fall, for the weekend of psychedelic bliss known as Liverpool Psych Fest. And it so happened that one blustery, late September morning I found myself with some time to kill before the various festival happenings, walking along the Albert Dock, home of the famous Beatles Story exhibit...and walking right on by. I decided, as I have been known to do, to avoid the popular thing and instead seek out something a bit more under the radar.

There would be no Beatles-specific outing for me that morning, no sir. I was bound and determined to visit the one and only British Music Experience. Into the wind I walked, and was nearly blown into the glamorous Cunard Building, home to the newly-installed BME. Originally exhibited in London, the BME moved to Liverpool this year, and fits this Northwestern music city hand in glove.

The grand old dame that is the Cunard Building is the perfect host for the installation, the graciousness and soaring ceilings reminded me of the various venues in cities here and there that were once elegant theatres that have been reincarnated as music venues. The layout of the main space is straightforward, with two wings of display cases flanking an open central space, complete with stage. More on that later.

I was lucky on the morning of my visit, thanks to the dismal weather I had the place virtually to myself for the duration of my time at the BME. As soon as I walked into the main room, I knew I had hit the music nerd jackpot. For someone who's been into music from the UK as long as I have, the BME was a treasure trove. Organized chronologically, the exhibits start virtually at the beginning of it all, covering the earliest forms of UK rock (hello, skiffle!) and diving right in from there.

The stage was used every so often for a holographic performance (yes, really) by none other than Boy George. The Culture Club frontman generously donated his hologram likeness to the BME, and it was rather a unique experience to have a private performance of the 80s legend. I'd love to see the BME add more holograms to their repertoire, not that Boy George isn't terribly enjoyable to watch.

The recommended wandering around time is 90s minutes, but I was easily there for close to three hours. I made an initial circuit, then circled back more than once to several key displays (hello, Beatles "Get Back" door, David Bowie stage outfits, Oasis Union Jack guitar, etc.). Each display case is thoughtfully arranged, and staged just so to ensure that the priceless musical artifacts within are given the proper visibility. Interactive podiums are peppered throughout, offering an opportunity to dig deeper into all manner of music history tidbits.

I confess, I was less interested in the more recent music in the BME (i.e. the TV talent show winners and boring pop stars), but that takes up only a small portion of the collection as a whole and it's good to have that arena included for context. The bulk of the BME is brimming with wonderfulness. There's even a Gibson-sponsored section, filled with instruments, so would-be Lennons and Starrs can try their hands at professional-grade musical equipment. No, I didn't indulge, but I'd recommend you do. Even the gift shop was enticing, though spacial constraints involving my suitcase kept me from buying souvenirs.

All in all, I had a splendid time on my visit to the British Music Experience. Between the quality of memorabilia the BME has in its collection and the friendly, welcoming staff (shoutout to Craig for being a ridiculously great host), I can't recommend this place enough. For music lovers looking for something special in Merseyside, look no further than the British Music Experience.