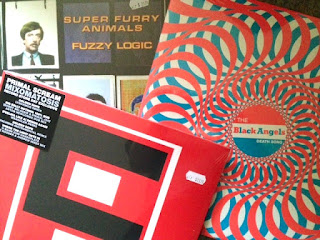 Records and nothing but. That's what LP Lust is made of.

Yesterday morning, I took a hiatus from my Record Store Day hiatus and got myself up bright and early in the name of buying some records.

I headed over to the CD Cellar in Falls Church, and was in line a few minutes after 6 in the morning. Half asleep, I waited patiently with other record lovers, more folks joining the line as the minutes ticked by. My list of purchases was short but meaningful: all four were titles from bands I adore and have adored for years upon years. When the doors opened and the melee began, I wasn't actually confident that I'd get anything on my list, so lusty was the crowd and so dispersed were the records. The list that follows is what I came away with:

I did not, sadly, get my hands on the Brian Jonestown Massacre record I wanted. Whether all the copies were already snatched up or I just couldn't see it amongst all the fray is anyone's guess. But don't worry, I'll get over it. Probably.

All told, I enjoyed my Record Store Day 2017 experience, even without a 100% success rate tracking down my records. The CD Cellar staff was awesome, especially considering how difficult a day yesterday surely was. Kudos to all involved for keeping smiles on their faces. My only complaint is that when the doors open, everyone was able to rush in and start clogging up the aisles. There was no real benefit of being there so early, other than maybe getting to rush in sooner than folks closer to the end of the line. I prefer when stores let a certain number of people in at a time, and then have all the RSD titles in a small area so they're easy to grab (or ask for). But that's a personal preference. Maybe you don't feel the same way.

In any event, I came away with my number one want: the Super Furry Animals Fuzzy Logic vinyl. Obviously, having the namesake record of this here blog on wax means quite a great deal to me. Being able to procure the new Black Angels record and some Primal Scream as well also made me feel like a gold medal winner. I hope that if you were out and about on RSD, you were able to get your paws on your favorites.