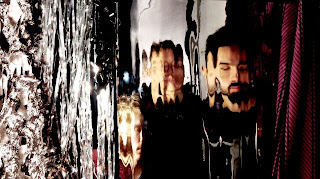 As y’all know, I had a rather enjoyable time down in Raleigh last year for my first ever Hopscotch, and it was so very good that I just had to go back again this year! The lineup looks frighteningly good, which means that yours truly will be making some seriously difficult decisions about how to spend her time. And of course, I had to get in touch with some folks that I was super excited about getting a chance to see in this installment of the festival. If you’ll be down for Hopscotch this year, make sure you keep these bands on your radar. And now, friends, let's get into it with this year's INTERVIEWSCOTCH!

Industrial surf gaze. Yes, yes, and yes. Those three little words are used by the three main players of Toronto's Odonis Odonis to describe their vibe to the world, and three truer words have just about never been spoken. The dark, industrial noise is there for sure, but so too is the splendid scuzzery and fuzzery of some lake-dwelling surf rock, not to mention that splash of shoegaze that pervades the songs of Odonis Odonis as well. It sounds good, and I dig it. Read on for some festivallian musings of the one and only Denholm Whale, and then make sure you get yourself some Odonis Odonis stat.

Fuzzy Logic: How are you getting to Hopscotch: plane, train, or automobile?Denholm Whale: A 2003 Ford Windstar riding in neutral, being pulled along by a garbage-powered Stegosaurus. We left last week. FL: Inevitably, you will forget to pack:DW: Most likely underwear. Which is a problem if my pants rip down the ass again. I could borrow some of Jarod’s; he is usually prepared with this kind of stuff. If that doesn’t work I’m going to have to make it part of the show or I will feel really awkward.FL: How many shows/parties will you be playing?DW: We are doing a couple shows. One day show for Brooklyn Vegan with Dope Body and in the evening we playing with Zola Jesus and Killer Mike. I’ve seen Dope Body before when they came to Toronto. The lead singer was contorting like some animatronic Raptor; it scared the hell out of me, but in the best way. FL: Band you're most looking forward to seeing at the festival?DW: Liars, Death Grips, and Young Magic, though I’m looking forward to dizzily stumbling in on some random shows in hopes of seeing a band I’ve never heard about. FL: What's the first thing you plan on doing upon arrival in Raleigh?DW: Feeding the Stegosaurus, smoking, and looking for the closest cheeseburger.FL: What was the first festival you ever attended, either as a musician or member of the general public?DW: My first festival was some weird Hippie Goth Christian rural Ontario festival called Monkfest when I was 13. Basically a bunch of kids let loose with shitty drugs and punk rock. The only bands I remember seeing was one called The Vinyl Riot and some random band that covered “Drain You.” I was head to toe in mud, there were probably only 80 people there and it ran for a couple days. FL: Favorite thing about festivals? DW: Walking aimlessly, exploring, beer, getting to see a lot of good bands in one space. It’s an ideal situation for me. All there is to worry about at festivals is getting to a venue, eating some food or maybe sleeping. It’s a miniature dream world.