The Good Ship Rediscovery: Black Grape - It's Great When You're Straight...Yeah 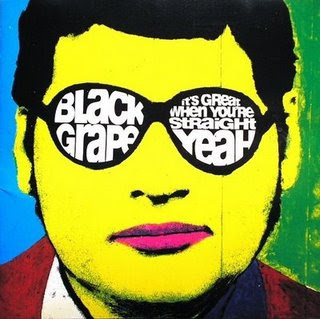 We all forget about the older stuff from time to time, in our quest to stay up to speed with the latest and greatest. But one should always respect their elders. So don’t forget about them, y’hear?

If you're at all familiar with Mancunian musical lore, you'll probably know at least part of the story of Shaun Ryder. You'll know the maybe true, maybe fictitious story of all those poisoned pigeons (refer to the excellent 24 Hour Party People to see this cinematic-style). Quite possibly, you'll know about the Caribbean recording sessions wherein the band spent pretty much all of their recording budget on the sticky icky. But what you might not know is that after Ryder's band the Happy Mondays (the iconic baggy/dance hybrid miscreants and one of those bands notorious for putting the "drugs" in "sex, drugs, and rock'n'roll") split (circa 1992), he was motivated enough to keep making music and formed another band. This new band was, well, quite a bit like the Mondays. That band, friends, was Black Grape.

Black Grape was, somehow, even cruder, lewder, and ruder than was the Happy Mondays. Which, as you may well know, is saying something. Ryder is, after all, a man whose vocabulary could make 1,000 sailors blush. Black Grape's debut, It's Great When You're Straight...Yeah is a collection of raucous, raunchy, all sorts of politically incorrect, and damn good songs. With Black Grape, Ryder was able to keep the people dancing while indulging in some cartoonishly exaggerated shock and awe (who else could come up with the line, "Jesus was Batman?"). Witness opening track "Reverend Black Grape," the album's opening track that pillories organized religion and even namechecks Hitler (fear not, gentle friends, it's done in a purely satirical, tongue-in-cheek way - Ryder's definitely not flying the flag for any truly unsavory notions).

If you're easily offended, you won't make it to the second song, the horribly grooved-up and equally offensive "In The Name of The Father." Those two songs alone would make for a hell of an album, but there's plenty more where they came from. "Yeah Yeah Brother" is a long-time favorite, all sleazy creep and salacious slink and Ryder's voice sounding almost tame as he threateningly coos an ode to a "backstabber." Another of my long-time favorite Black Grape jams is "Shake Well Before Opening," which opens with donkey impressions and Ryder offering "Come and have a go if you think you're hard enough," before breaking out into some seriously funky little grooves. Quality, as my friends across the pond would say.

Happy Mondays might well be the band that Shaun Ryder is remembered for, but it would be a shame if Black Grape ended up falling by the historical wayside. This record came out in 1995, and still sounds as tough and as fun and as gritty as it did way back then. If you're looking for a good time, you might just want to pop this on the old stereo and just see what happens.