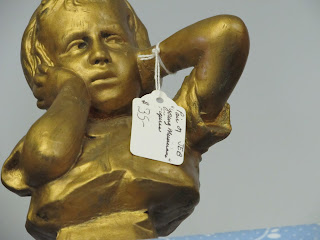 As y'all recall, I went out to Harrisonburg last year for my very first MACRoCk. I left super smitten and totally stoked on the idea of going back. So when the 2012 installment rolled around, I made dang sure to go. And wouldn't you know it, this year was even better than last year. Below are all the reasons why.

Another beautiful blue day dawned and the Ttotals boys and I headed down to grab some grub at the Artful Dodger before I got my panel on. On the way over we ran into half of The Snowy Owls and my fellow panelist Shannon Cleary, so our mini gaggle sat down together for some quality breakfast (pancakes and $2 mimosas! I love you, Artful Dodger). Also, you know you're in the right spot when Lower Dens is eating in the same restaurant. And yes, still have a thing for red-headed guitarists.

The panel, held in the basement at Clementine, was a good time indeed. My three fellow panelists and I discussed such hot button issues as our roles in the industry, how we get our news/music/info, and what we thought about the scenes in our respective cities. Thanks to everyone who came out to listen and participate, it was great to have you there. After the panel, it was farewell time with the Ttotals boys, who had a long drive back to Nashville. It was great to get so much hang time with those two, and watch this space for some Ttotals news coming soon.

I was faced with the difficult decision of deciding what to do with some time. It was between a catnap and a shopping trip to the Rolling Hills Antique Mall. I went with the latter. I got so wrapped up in the myriad rooms and wares for sale that I managed to miss some of the Peace Beast set back at the Dodger. I'd wanted to see Peace Beast for a long while, and the songs I saw didn't disappoint. Their beefy, 90s-perfumed lady-fronted rock was thick and juicy, and I all sorts of loved it. Those four have struck gold together, proving once more that anything with Roanoke ties/featuring Kyle and Brandi of The Diamond Center can do no wrong.

Left & Right was up after Peace Beast, and those Charlottesville dudes threw down. They played an appealing sort of poppy, punk-edged grit that the kids seemed to enjoy. Their banter was entertaining (example: "This is our third song," was proclaimed before they played, wait for it, the third song of their set). As I listened to them I began to imagine them on a bill with Hammer No More The Fingers, some of my Carolina favorites. College rock radio crept into their sound for sure. Very high energy, and pretty dang fun.

Spoiled as I am, I got to see The Snowy Owls for the second time in a week (the band having played my First Annual Anniversary Throwdown the weekend before MACRoCk). As expected, their set was amazing. The back-to-back playing of "Could" and "Papertooth" had me on Cloud 9. The Dodger filled up quick for them, as it should have. I frequently heard people talk of their set for the rest of the day, and have to say they were near the top of the weekend for me. So much beautiful, melodic scuzzery. If there is justice in the world, these Richmond dudes will soon be Big Time. Love.

After that, a few hours elapsed in which I spent some serious quality time with my bed. I awoke with a revised plan for the evening, and I veered off course and over to the Court Square Theatre to see a little goodness. When I got there, Bison was finishing up their set. The place was packed out, and people were really into what was happening up on stage. The seven members of Bison (mostly gents in waistcoats and crisp white shirts) played a rollicking style of folksamericana, and I joined the crowd at large in enjoying the music quite a bit. The place erupted when they were done, the mob begging for an encore the band couldn't give due to time constraints. I was very, very impressed.

Next to take the stage was my beloved The Loom, playing the last show of a lengthy Spring tour. As they set up I was reminded for some reason of the wedding I had seen earlier, on the Court House grounds. The bride was beaming, as was the groom, as they said their "I Do's" in that small gazebo surrounded by family and MACRoCk onlookers. It was a lovely moment in a lovely day. And more lovely moments were to come, thanks to The Loom.

It was my first time seeing the band as a trio, the ladies couldn't be there so it was a boys club. It took a little getting used to, so accustomed am I to the sounds of the band with lady voices and various string and horn instruments that were missing from the set. But by the end I was a fan, as the stripped-down (yet somehow bulkier) sound really suited the songs well. There is still something mystical about them, to me, something impish and otherwordly in their urban folk songs. I admired singer/guitarist/uke-ist John Fanning's red skull-decorated guitar strap and was soon blushing about a song dedication. By the end of their set, the band was playing to a fairly-packed house, and the faces on just about everyone there (band included) were pleased.

I stuck it out for one more band, Jeffrey Lewis & The Junkyard, another NYC outfit. They were the first band I recall having mentioned a distortion pedal at this particular MACRoCk venue, and the first also to have projections. The drummer caused quite a titter to go through the crowd before they began with his adorable little, hammed-up calisthenics routine. Nice form, sir. As for the band, they were quirky as heck, which was appealing and refreshing. Some folk, some rock, and some appreciation for history. The projections got interesting when Lewis showed some cartoons he had done, one featuring an alien, sleep, a star on the Walk of Fame, and more sleep, the other a cute little piece about the French Revolution. Way to appeal to my history nerd side, y'all.

Overall, my second MACRoCk experience was even more enjoyable than my first. Kudos to all involved in the creation of the fest, to all the bands that played so well, and for the attendees for being pretty alright. Thanks also to the committee for inviting me to be a panelist. Super fun! Bottom line, friends, MACRoCk is a pretty special thing. If you can play it, do. If you can go check it out, do. See y'all next year.