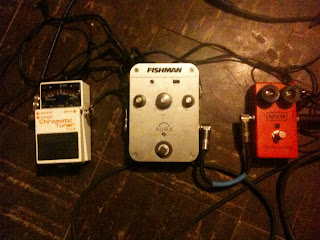 Ugly Purple Sweater, when I think of it initially, conjures up retina-burning images of putrid purple argyle monstrosities. Yet the name also conjures up rather pretty, sweetly strummed, nigh on twangy urban folk, pleasing to the eye and ear, straight outta the WDC. I recently met up with singer/acoustic wiz Sam McCormally at a bar formerly known as The Left Bank in Adams Morgan, where we talked pedals over beer and really, really bad club music. Ugly Purple Sweater just so happens to be playing over at the Rock & Roll Hotel this very evening, and having recently seen them band live I suggest you consider adding their set to your weekend plans.

Fuzzy Logic: Which pedal is your very favorite and why?
Sam McCormally: My very favorite pedal…I used to play with the distortion pedal called the Big Muff. It was a specific Big Muff, the Big Muff Pi, which I have heard, although I cannot confirm, is made from old Soviet tank parts. Which can’t be true, really, come to think of it, but this is what I was told. But it’s a distortion pedal, makes things sound pretty gnarly. I like that pedal a lot. It sounds like something mysterious is happening on the inside, it sounds like an organic sort of product, rather than something very sort of doctored.

FL: Favorite chord?
SM: I play a lot of, and probably too many, full diminished seventh chords.

FL: Who’s your guitarist icon?
SM: Well, past Deerhoof guitarist Chris Cooper, who played with the band from Apple 'O through Runners Four is probably my favorite guitarist, there’s a period of time where his guitar work is my favorite guitar work. He doesn’t have a huge rig, but he gets really great tone. Along with John Dieterich, whose been playing with Deerhoof since before that. I hold a special affection for the records that they're both on. They play a lot of unison parts with things just slightly, and intentionally, I think, out of tune, which produces a sonic effect similar to that of a swarm of bees. I love it.

FL: With all the pedals out there, how do you decide which ones to procure?
SM: Well it’s interesting, because right now I primarily play acoustic guitar in this band, which raises the question of how do you amplify an acoustic guitar in the context of a live rock band? Which is complicated. You can mic it, but then if you’re playing with a rock band it’s difficult to rig it so that you don’t have a lot of feedback. You can plug it in, but then if you have the kind of pickup that I have, it doesn’t sound very good. The pedal that I rely on most right now is a pedal that helps you overcome this problem, which is how do you make an acoustic guitar sound like an acoustic guitar? And the thing I have is called a Fishman Aura pedal, it’s a digital pedal that superimposes the sound of an acoustic guitar onto the signal coming out of your acoustic electric guitar. It’s what I’ve settled on as sort of the best of the bad options that are presented to me as someone who’s trying to play an acoustic guitar through a PA system. A lot of people don’t like them because they think they’re sort of artificial, they say, “Well, that’s not the sound of YOUR guitar, that’s the sound of this other guitar that the Fishman people have imaged that they’re then projecting onto your guitar,” but then that raises a lot of questions like what is amplification in general? Are you ever getting the sound of your instrument? So for me it was the best out of a series of poor options that led me to this particular pedal.

FL: What’s your dream pedal?
SM: I really like the Memory Man delay pedals, but they’re slightly outside my price range at the moment. I think they’re like $250 or something, which I could probably throw down for, but in the context of all the other gear…if every $250 piece of equipment I wanted I were to buy, I’d be bankrupt. So I have to hold on.