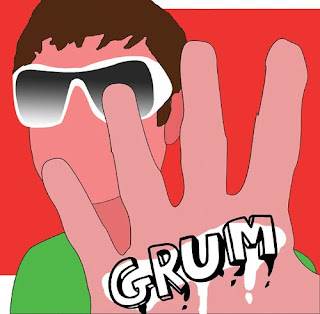 Ah, Avalon. The mega-huge LA club right across the street from that oh-so iconic Capitol Records building is definitely not what you'd call my natural habitat. Prowled by intoxicated ladies in itty bitty, teenie weenie "dresses" and the dudes who love to ogle them, Avalon is a place to see and to be seen. Yours truly only wanted to see one person amongst the throngs, that being Graeme Shepherd, or as he's known to the electro dance lovers the world over, Grum. I was intrigued to see what the talented (and yes, adorable) Scot would have up his sleeve for his DJ set. And the man didn't disappoint.

In Grum's world, making dance tunes is an art form, a rare essence if you will. His deftness with a slick beat isn't just present in his own songs, as I discovered quickly on. The sounds Shepherd wrapped together created a robust, insanely danceable rhythm that was totally hard to ignore. The beats, o the beats. They did. Not. Stop. Grum's set was an impressive thing to behold, on its' own of course, but especially when you throw in Avalon's crazy, intricate lighting effects and the horde of gleeful revelers getting their collective groove on down on the club's main floor. Scratch that. Impressive doesn't begin to describe it. The soundsystem was killer, enhancing every pulsating note with a rich hugeness.

The kids on the floor were digging everything that Grum was giving them. And truth be told, I was too. Here's a dude who's pretty gifted at doing his own thing, but he also proved that it takes no small amount of skill to have a successful DJ set. I was particularly impressed when, in the midst of a totally breathless onslaught of dancey gems, the man had the guts to switch it up and slow the tempo way, way, way down. It was like going from 150 mph to about 30 mph. But you know what? It totally worked. And the folks at Avalon lapped it up, as they had Grum's entire body of work. Kids, a few words of advice. If you don't know how to twiddle the right knobs and kick out the right jams at the right time, please please please leave it to the professionals. Like Grum. I'd most definitely go see the man again, and if you're in the mood for a damn good time on the dancefloor, you couldn't do much better.

mp3: Through The Night (Grum from Heartbeats) (via the fine gentlemen at Noise Narcs)