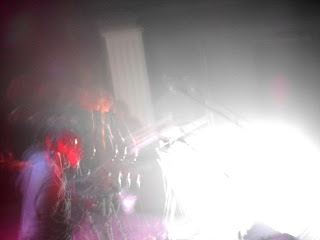 As I've certainly mentioned before, it’s a perk of being a music blogger that one gets to see a whole lotta good live music on a pretty regular basis. But amongst all that music, there's a handful of bands that really, truly, seriously get my blood going. Bands that make the hairs on the back of my neck stand up and send goosebumps prickling on my arms and give me sweet, sweet fever and a mild case of the shakes. The Black Angels is one such band. I try to see this band whenever and whereever humanly possible, because live they are pretty much peerless. And fearless. Oh, and they're probably the loudest band I've ever seen live. Yes, even louder than Mogwai, Mono, AND My Bloody Valentine. Maybe even louder than all three combined. And y’all know how I love noise. So when these Austinian masters (and mistress) of psych perfection rolled through DC, you can bet yours truly was there. And as expected, what a show it was.

It had been a long time since my last Black Angels show up in the November cold of Philly, and lordy me had I missed them. The deleriously delicious drone was in full effect from the first moments of their set, as the five fallen angels undertook "Entrance Song" bathed in spooky red lights. Back-to-back sniper songs followed, the elder of the two "The Sniper at The Gates" backed up by "The Sniper," and each was superb. The sexy sliding, smoking intro of the latter a perfect counter to the militaristic cadence and overt political themes of the former (true, it's an oft-repeated them in many TBA songs).

I was pleased at how much the set veered toward material from the band’s jaw-droppingly stellar first record Passover. At one point, three songs in a row from said record were played; the brooding “Better Off Alone,” the chilling and mesmerizing “Young Men Dead,” and the monumental “The Prodigal Sun.” “Young Men Dead” in particular was like flying right by the sun, the ferocity of the fuzz crashing all around and the band taking the assembled audience to all sorts of frighteningly beautiful places. When be-hatted mouthpiece Alex Maas flatly sang “We can’t live/if we’re too afraid to die,” right before the wall of sound roared back to life, I thought I might fall over the dang balcony railing.

“You On The Run,” one of only a couple songs from the Directions To See a Ghost record, was as spectral as ever, all political grumblings and noise of an otherworldly beauty. My one complaint about the set was that, as in Philly, the band skipped my favorite part of “Yellow Elevator #2,” the transcendent vocal section towards the end, and launched immediately into “Black Grease.” The groove of the meat of the song is enhanced so much by the unexpected and heavenly vocal harmonizing section that I’m absolutely dying to hear it live. Of course, The Black Angels is one of the only bands that makes me happy 99.8% of the time, so I’ll let it slide. The vintage retro pop of “Telephone” was a welcome inclusion in the set, causing many a head bob and tipsy shimmy amongst the crowd. The sound was heavier on guitar than the organ-leaning recorded version, and the extended instrumental muddiness on the end of the song was very welcome.

“Bad Vibrations” was a great, great, great way to close the set, and was so loud I could feel the song from the heels of my cowboy boots all the way to the roots of my hair. Yes, really. I thought quite frequently through the set how very, very good this band is, and how far they’ve come since that show at the Black Cat so many years before at which I first fell in love. After a brief respite and an acoustic Alex-ian number, the full band returned for the dynamite “Bloodhounds on My Trail,” during which I might have swooned for just a second courtesy of all that ridiculous guitar play. The dark, dark undercurrent in the song was even more evident on this night, and how very wonderful a thing that is. “Fucking rock and rolllllllllllllllllllllll!” someone hollered from deep within the crowd right before the final song of the night, and the request was granted when the Angels began “You in Color.” Rock and roll infuckingdeed.

Bottom line, here, friends, is that if you haven’t yet fallen in love with The Black Angels, you have no idea how much you’re missing out. This is one of the best live bands around BAR FUCKING NONE. End of story.

[photo by Megan Petty - and yes, that's exactly what it's like seeing TBA live]