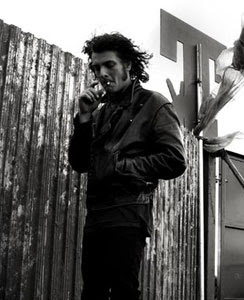 I could think of no better way to get things going than with my choice for the oh-so coveted (and sure, a little silly) title of Stone Coldest Fox of 2010. As we're pro-objectification here at LET, we like to celebrate the foxiness of some of our favorite music folks every now and again. Now, I'm sure some of you, and perhaps myself included for most of the year, were prepared to see Mister Trent Reznor wearing the crown for the third year in a row. Well, friends, as stone cold foxy as Trent is, it was time to pass the torch.
As a member of one of my favorite bands (Black Rebel Motorcycle Club), Peter Hayes has been on my radar for many years now. BRMC is exciting and terrifying and powerful and lovely, both live and on record. I've watched with interest as he and the band have grown and evolved, and it's been a beautiful thing to behold. As can be said about Mister Hayes.
To be Stone Coldest Fox, a dude's got to have a few key ingredients working for him all at once: He's got to be knee-weakeningly sexy (check), give off kind of a dangerous, bad in such a very good way vibe (check), and play whatever instrument he happens to call home with such passionate abandon that you can't help but be irrevocably drawn in while he's playing (check). Bonus points for the casual droop of a ciggie in the mouth whilst playing. Bearing all that in mind, this choice seems rather easy to me. And so it is that Peter Hayes joins the ranks of Stone Coldest Foxdom.