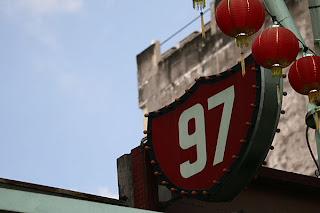 We've all got countless choices to make, each and every day. Some are pretty dang hard, while others are no-brainers. I made one of the latter decisions not long ago, when faced with the terribly sad news of the postponement of the Steve Mason show. I had two options: stay home and mope, or go out into the Baltic chill and see some pretty daggum good live music. Fear not, friends, common sense prevailed, and I was soon out and about enjoying an evening filled with good tunes by S. Carey and White Hinterland. Sometimes those changes of plan turn out to be a little bit of alright.

Despite the slap-in-the-face cold of the evening, all was warm and cozy at the Rock'n'Roll Hotel when I arrived. I'd like to think White Hinterland had something to do with this. I must confess, when I first walked in I had to sort of test myself as to what year it was, because coming from the stage seemed to be a nouveau trip-hop sound (a trend repeated in several songs during the set). The beats were slow and hypnotic, trancelike and sultry and a perfect backdrop for the majorly haunting voice of Casey Dienel. Dienel's voice proved breathy, playful, come-hither, and forlorn all at once, sometimes even during the course of one song. An unexpected and awesome cover of Monica's "Don't Take It Personal" was given a smooth, silky treatment, and made for a great choice for the set. The music of White Hinterland is rather atmospheric, perfect for trying to warm up on such a bloody cold December evening.

Given the Bon Iver association, you'd expect Sean Carey (AKA S. Carey) and his band of friends to have a little bit of a rustic, woodsy sadness to them. Well, they definitely did. There was more to the band than that, though, which surprised and cheered me. Full of pretty gentleness, S. Carey could just as quickly build hulking, noisy crescendos with more than a little aggression. For his part, Carey's voice is nothing short of lovely, honey-thick and very magnetic. After a couple songs I felt much better about not seeing Steve Mason, and really began to enjoy their set. "Mothers" showed off the pervasive sweetness in the songs, as well as some glorious harmonizing. Their pitch, my friends, is pretty much perfect. And the sudden rocking out at the end of the song was quite a pleasant surprise. Sentimentality coursed through their songs, with no short supply of nostalgia and wistfulness. Forays into random instrumental meanderings were much appreciated. There was something rather charming about them, very honest.

Though I was (and still am) bummed not to see Mr. Mason, these two bands definitely helped ease the pain. From the almost stark beauty of White Hinterland to the lushness of S. Carey, it was a night well spent.