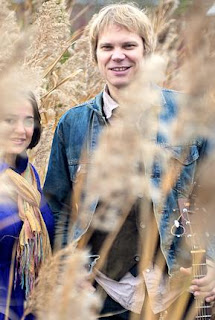 Hot diggity dog, y’all. This weekend marks the happening of a very, very special festival, and while I’ll be in Baltimore I highly recommend that if you can you make your way down to the wilds of Kentucky (Thorn Hill farm in Morning View, to be exact, which is a paltry 23 miles from Cincinnati!), for the best-named festival around: Whispering Beard. There’s gonna be more awesomeness than you can shake a stick at out there this year, so get your skates on. And your beards, of course.

North Carolina transplants Paleface & Mo were ever so kind enough to answer some of my festivalian questions, which you can find below. Do so while listening to their salty, twangy fantasticness, These two will also be touring after the festival, so there’s a wide variety of opportunity in which to take in their divine noise. For example, October 7th at Iota, local friends. See you there.

Les Enfants Terribles: How are you getting to Whispering Beard: plane, train, or automobile?
Paleface & Mo: Wheels!

LET: Inevitably, you will forget to pack:
PF&M:Things we've left behind in the past include phone chargers, toothbrushes and toothpaste...but we're getting better...so hopefully not again...

LET: Who will you be sharing a stage with on the day?
PF&M:Those Darlins, Trampled by Turtles, Rumpke Mountain Boys.

LET: Band you're most looking forward to seeing at the festival?
PF&M:We're only going to be able to hang out at the festival on Friday, so we're looking fwd to checking out the bands that will be sharing stage with us that day.

LET: What's the first thing you plan on doing upon arrival in the countryside?
PF&M:Walk around and stretch them legs!

LET: What was the first festival you ever attended, either as a musician or member of the general public?
PF: I think it was Lollapalooza '96–a band that was covering one of my songs put me on the guest list.
M: The first festivals that we played together as a band were almost two years ago...Not sure which came first: Pickathon, Bristol Rhythm and Roots Reunion, Shakori Hills, Riverbend, and Floyd Fest.

LET: Favorite thing about festivals?
PF&M: Meeting lots of peeps and getting to check out new music, specially when the festival has several stages.