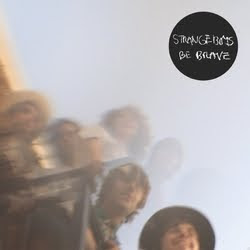 I’ve thought about this quite a bit, and after much consideration I think my favorite thing about The Strange Boys could very well be their brattitude. Cuz let’s face it, y’all, there’s something really kinda bratty about the way they make music. It’s not just that they’re all pretty dang good at what they’re doing. It’s almost as though they play in a way that almost mocks how good they are, as if they’re scoffing at what they’re doing. And then there’s Ryan Sambol and that little rapscallion of a voice of his. Scratchy and nasal and almost jeering at times, Sambol’s voice anchors the perfectly-produced grit and grime and retro-worship that runs rampant all over Be Brave. And I tell you what, brothers and sisters, this band can be as bratty as they wanna be if they keep making music this good.

I’m writing about this record on a Sunday afternoon, and it seems a pretty dangum perfect Sunday afternoon record. It’s not too jarring (save, of course, for Sambol’s pleasantly vexing voice), its’ rhythms are on the subtle side, and it would make a perfect soundtrack to a pitcher of mimosas and some good conversation among hungover friends. Then again, it’d probably sound just as good on any other day of the week, so don’t feel like you have to reserve Be Brave for brunch alone.

As you might expect, Be Brave definitely takes all sorts of cues from all sorts of places. You’ve got the strident, plucky guitar found both in 1950s rockers and rollers and those lovable 60s Brit Invasion types playing hide and seek all over the record. A dissonant sax makes an appearance in (super awesome) title track “Be Brave”, and somehow makes perfect sense. “Friday In Paris” sounds a whole lot like The Kinks and The Small Faces, with just a hint of front porch country thrown in for good measure, and that’s a whole lotta alright with me. I go nuts for that irrepressible jangle of “Night Might” and the near-howl of Sambol’s vocals and it’s rapidly becoming my favorite track on the record. They’ve twisted and manipulated various elements to come up with their own delightful sound, and what a dandy little noise it is. Is it too soon to already be lookin forward to their next album? Cuz I am.

mp3: Be Brave (The Strange Boys from Be Brave) (Link removed by request...TWICE! Hey kids, don't look at us)